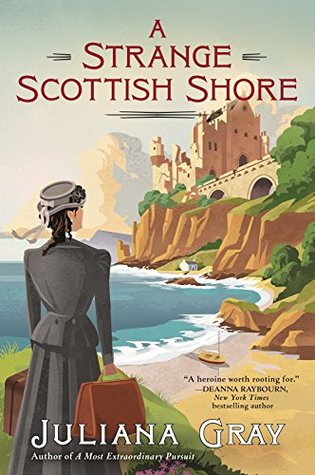 Sometimes you pick up a book in a series and immediately know you are going to love it. That’s what happened with this one.

Just the cover and title alone was enough to entice me to read this one and next thing I know, within a couple of pages, I already know I desperately need the first book in the series.

For a number of reasons though, not just because I liked Emmeline Truelove and wanted more, but mostly because I felt like I needed to know more about what was going on with the characters and the over all story.

Scotland, 1906. A mysterious object discovered inside an ancient castle calls Maximilian Haywood, the new Duke of Olympia, and his fellow researcher Emmeline Truelove, north to the remote Orkney Islands.

No stranger to the study of anachronisms in archeological digs, Haywood is nevertheless puzzled by the artifact: a suit of clothing, which, according to family legend, once belonged to a selkie who rose from the sea in ancient times and married the castle’s first laird.

But Haywood and Truelove soon discover they’re not the only ones interested in the selkie’s strange hide, and when their mutual friend Lord Silverton vanishes in the night from an Edinburgh street, the mystery takes a dangerous turn through time, which only Haywood’s skills and Truelove’s bravery can solve (summary from Goodreads).

Emmeline Truelove reads a little like Amelia Peabody so if you are a fan of those books (and you know I am) then you will find a kindred heroine in Emmeline Truelove. She’s a little bossy, a little know-it-all-y but she’s got sass and charm in spades. I was however frustrated by her inability to fully commit to Lord Silverton which was why I felt like I especially needed to read the first book. Had he wronged her in some way? Was she just stubborn? I wasn’t sure why she fought against him so hard when it was clear that he loved her. I mean she did travel through time to be with him and yet she kept insisting that she wasn’t in love with him which seemed off to me so I felt like I needed more history which I would eventually glean from the first book.

I think my favorite part of the story though was the romance between Emmeline and Lord Silverton. They had a chemistry that can’t be denied and I love how tentative and open Lord Silverton was with his feelings for Emmeline. He clearly wore his heart on his sleeve and knew exactly what he wanted when it came to their future and feelings. Lord Silverton himself is easy to love and pairing him with Emmeline–though predictable—was so right and comfortable that readers will feel at home with the pair.

This one also reminded me a little of Outlander—though not so heavy as all that but still hints of it all the same. I liked the idea of time travel in this book but at times I also felt like it wasn’t explained well enough to make sense. For example when Max and Emmeline are talking about why she can sense Lord Silverton and feel Max’s pull, I found myself scratching my head. Then adding a couple of characters from the future and I finally just had to throw up my hands and be like ‘ok it’s time travel and there are no rules’.

On the whole though the time travel element worked for me. I liked how there were multiple characters that moved through time and the idea of being called back by the master time manipulator. I kept wondering when Lord Silverton and Emmeline were going to be called back so that unknown made the book all the more suspenseful.

The thing that bothered me the most throughout the novel though, was the little excerpts from the Book of Time at the beginning of each chapter. I wasn’t at all interested in that and couldn’t understand how it related at all to the overall narrative. It didn’t seem to have a greater purpose in my opinion, however it does in fact have a purpose in the narrative but not one that I felt entirely invested in.

Also I felt a little at a loss as to who the apparitions were in this book, having not read the others. I was like wait why is the Queen in Emmaline’s room? Where did she come from? I think this might have made more sense had I read the first one.

After about chapter 3 I immediately went to download the first book in the series which I will be reading next. I had planned on reading the first one this summer in preparation for this book, but the summer just got away from me and I didn’t have time to read the first one.

The cover design is also fantastic. It hints at a castle on the cliffs with a hint of mystery as the women suggests someone there to investigate something. Its bright enough to appeal to many readers and eye catching with the colors to grab you while you are searching for a mystery to read.

If you are looking for a new lady gumshoe (like I perpetually am) with a flair for adventure, then I think you will like Emmeline Truelove. This story is part adventure novel, part romance, and part mystery. There is something for everyone to enjoy. I gave it 4 stars only because I felt a little out of place with some of the references to the first book as well as the excerpts at the beginning of each chapter, but it was a great read all the same.

As a side note, this author is also a pseudonym for one of my favorite authors, Beatriz Williams, so you know that the writing is going to be fantastic as well as the story!