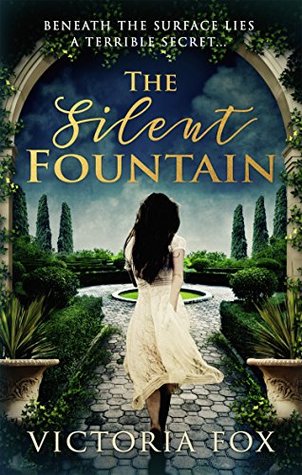 There is nothing like fall to make you want to read a mystery or a Gothic novel…..well at least for me! Fall is the perfect time to curl up with a creep or suspenseful book and spend the day lost in the mystery. That’s exactly what I did with The Silent Fountain!

I read this book as part of Dewey’s 24 Hour Readathon, it was hard to break with my Pink Carnation book but somehow I found the ability to read something else, and I was not sad in the least. This book was a great Gothic novel!

Tragedy sends troubled film star Vivien Lockhart into the arms of Giovanni Moretti–and it seems her fortunes have finally changed. Until she meets his sister and learns that her new husband’s past holds dark secrets…

Lucy Whittaker needs to disappear. But her new home, the crumbling Castillo Barbarossa, is far from the secluded paradise it seemed. Strange sounds come from the attic. The owner of the house will never meet her in person.

The fountain in the courtyard is silent–but has never run dry.

Across the decades, Vivien and Lucy find themselves trapped in the idyllic Italian villa. And if they are ever to truly escape its walls, they must first unearth its secrets (summary from Goodreads).

I liked this book more than I was expecting to. The first chapter or two was a little meat for me. Plus I tend to like my Gothic novels set in the Victorian-esque time period, not just before I was born.

It just didn’t seem to be long enough ‘in the past’ for me to really get into it. I wasn’t convinced when I read the description, but so many others loved it on Goodreads so I decided to give it a go. I was not disappointed in my decision in the least.

As I said the first couple of chapters were kind of ‘meah’ for me. I wasn’t really invested in the story or characters but then when I was on a Readathon break, I found myself thinking about the story and wondering how things were going to progress and how the characters were going to evolve.

Before long, I found myself wanting to know more and wanting to keep reading. This books had hints of Victoria Holt and Mary Stewart without being a cheep carbon copy of them and also a little more modern which I thought was tantalizing.

The duel storylines worked well and I liked watching how things culminated for the two plots in the end. The end was a little rushed considering the book was long with plenty of time to build up the ending, but on the whole it was satisfying.

This is a new author to me but from what I gather, this book is a little darker than some of her other books. I liked the tension and darkness within the plot but at times felt like things moved a little too slow in places that could have been faster and oo fast in places that things should have been slower, if that makes sense.

This book was hard to rate, on one hand I wanted to give it 4 stars because I liked the Gothic feel of the novel but on the other hand I felt a little frustrated with the pace of the novel in various areas (both too fast and too slow) which made me want to give it 3 stars. I decided to combine the two and go with a 3.5 rating. It was enjoyable and had a distinct Gothic feel to it so fans of that genre will enjoy it but it needs some polishing in the pace department.

3 thoughts on “Review: The Silent Fountain by Victoria Fox”