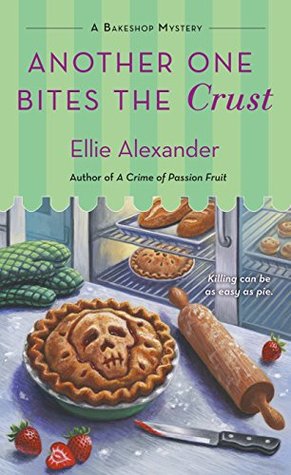 I recently reviewed one of Ellie Alexander’s novels and I loved how she incorporated unique locations in her book. One of her books was based in Leavenworth Washington which is basically the Christmas town of the Pacific Northwest.

That was the reason I agreed to review this one….this time Alexander has us in Ashland Oregon. I live in Oregon (in Salem, the capital) which is about 5 hours north of Ashland but I have been to Ashland many times and I loved the charming town.

They host a yearly Shakespearean festival there which I have attended before and the quality of acting is superior to man festivals. Plus the theater is outdoors and reminiscent of the famous Globe theater. So I thought this book offered a unique setting for a murder.

It’s the role of a lifetime for Jules. The Shakespeare Festival has returned to Ashland, Oregon, for the season and Torte has been cast as the supplier of Elizabethan-era treats for the main event.

But on the eve of opening night, a brawl between Jules’s friend Lance, the artistic director, and a strapping young thespian named Anthony almost brings down the house. . .and the next morning, Anthony is dead. Jules knows that Lance loves his drama—and his just desserts—but she also knows that murder is way off-script for him.

Now it’s up to Jules to cut through a bevy of backstage betrayals and catty co-stars who all have their own secrets—before the curtain drops on someone else (summary from Goodreads).

The first thought that stood out in my mind was THANK YOU Ellie Alexander for not making Oregon sound like ignorant and incompetent hillbillies! When people think of Oregon the first thought is often back woodsy folks cut off from the world, or idealistic tree huggers who recycle. In this book, the Oregon police are capable and the characters are cultured thespians. I loved that she kept the town charming and colorful but yet realistic and modern. It’s clear that she has a healthy respect for Oregonians and she really brings the town and its culture to life.

While this is the 7th book in the mystery series I didn’t feel completely lost within the narrative. Sure there were some nuances that I felt like I was missing but overall it didn’t detract from the novel. I normally would prefer to start a mystery series at the beginning so I could fully appreciate the characters however, I liked Alexander’s story telling style in her Sloan Krause series that I figured I would try her more popular series, A Bakeshop Mystery.

This is an easy to read cozy mystery that does keep you guessing until the very end. I was actually really anxious for the characters and the final outcome which is sometimes unusual in a cozy. I was invested in the story and the mystery enough to keep reading even when I said ‘one more chapter’. As I said there were some nuances that I felt like I was missing from previous books but on the whole I wasn’t entirely lost.

Also, the food in the book is to die for. The descriptions of some of the desserts were enough to make me hungry even though I had just eaten. I was drooling at times and felt like I gained 10 pounds just from reading this book. I want to visit this bakeshop now!

If you like cozy mysteries with delicious food descriptions as well as intriguing mysteries then this is the book for you. If you are worried about starting at a late point in the series, don’t be but if you want the full experience start with the first book. I am excited to go back and see how the characters have evolved since the first book.

Book: Another One Bites the Crust (A Bakeshop Mystery #7) by Ellie Alexander

4 thoughts on “Review: Another One Bites the Crust (A Bakeshop Mystery #7) by Ellie Alexander”