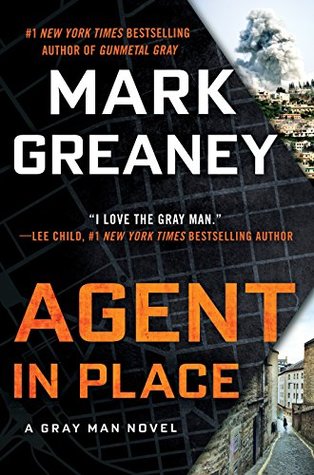 I’m one of those people that really really really loves government thrillers, military operatives, spy novels, and conspiracy stories. Admittedly I haven’t read a lot of classic ‘spy novels’ but secretly my dream job would be international spy master or CIA operative.

Travel the world with unlimited resources and loose rules with no one to report to….it all sounds horribly romantic to me, which I am sure in real life it is anything but. However a girl can dream.

In addition to my rose colored view of the world, I also have all the latest spy movies queued up ready to watch at any time. I love espionage and seeing how the darker side of government and politics works. It’s my guilty pleasure.

I don’t really know why I haven’t read more spy novels, it’s a genre that I think I would love but I just haven’t committed to really diving in and reading more than one or two here and there. Which is why when this book came along I was in a mood to read something that would be fast paced, get me hooked, and take me someplace other than Regency era England….check, check, and check.

Court Gentry is back in action. This time he’s working on behalf of a well-connected group of Syrian expats to secure the Syrian president’s mistress so they can use her to bring down the president’s regime. But the expats’ plan goes awry when it’s discovered the mistress has a baby–the Syrian president’s only male heir–hidden away in a Damascus safe house.

Court goes after the baby, a decision that comes at the price of the mistress’s life. The expat organization deems the boy now useless to their cause and refuses to protect him against the Syrian first lady and the notorious Swiss assassin in her employ. With no support on the way, Court realizes he’ll have to take down the Syrian president himself if he and the boy are going to make it out alive (summary from Goodreads).

Obviously I am coming into this series six books too late. When you are that far into a series, it’s evident that there are a number of different things you might be missing as a new reader. Sometimes that matters and other times it doesn’t. I would say with this book it was a mixed bag.

On the whole I didn’t feel so lost that I couldn’t enjoy the book as a stand alone….in fact I enjoyed it as a stand alone very much, but on the other hand there were clearly things that I had missed. I will let you decide if that’s going to bother you or not. I knew when I picked up this book that I would have to just go on faith and not read too much into things I was so clearly not privy to.

This book comes in at just over 500 pages, so it’s long. But there is A LOT going on in the action department so those 500 pages go quick. This book is a modern day thrill ride and it had all the bells and whistles. I found myself reading later and later just to see what was going to happen next. It is realistic and the plot believable which was one of the things I loved so much.

To reiterate, this book is unapologetically action. There really is nothing else to appeal to a wider audience so if you are looking for something more inclusive of other genres, this isn’t it. It was refreshing and an escape for me. I’ve been spending a lot of my reading time engulfed in historical romances or historical mysteries and this was so far from things I have been reading that it was a welcome distraction.

As for Court himself, I liked him. He is a genuine guy with ‘a heart of gold’….a fact which we are reminded a little too much about throughout the novel. He was easy to like and his intentions were honorable but again, I didn’t like being told that on a regular basis.

Since I haven’t read too many modern day spy novels or thrillers such as this, I can’t be sure how it compares to other authors within the genre. In my opinion this was a fabulous book that would be a welcome distraction on vacation, on a sick day or on a cold rainy afternoon.

It was a fast paced read…..perhaps not ‘quick’ based on the actual page length, but it felt like it went quick because there was a lot of action. I have read a few other reviews on this book by people who read a lot in this genre and it sounds like this author and series is setting the bar pretty high and I would agree. I felt like I was reading something special and original rather than a formulary, run of the mill spy novel. I would gladly read more books in this series or by this author!