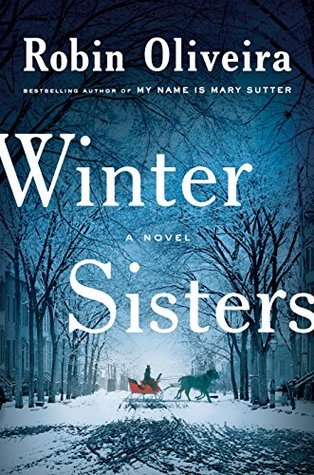 The thing that caught my eye about this book was that the protagonist was a Civil War surgeon–and a woman. My masters is in American History but my speciality is women in Civil War nursing so seeing a book with a female Civil War surgeon as the main character totally made me want to read this book even more!

This is the second book in the series but I hoped not much had transpired where I needed to read the first book, though I will admit that the first book sounds wonderful and I was temped to pick it up before this one but I got distracted with something else entirely.

So this book hit a lot of marks for me when the pick came through–Civil War surgeon, disappearance, beautiful cover art, and the promise of dark secrets revealed. I was totally in on this one!

New York, 1879: After an epic snow storm ravages the city of Albany, Dr. Mary Sutter, a former Civil War surgeon, begins a search for two little girls, the daughters of close friends killed by the storm who have vanished without a trace.

Mary’s mother and niece Elizabeth, who has been studying violin in Paris, return to Albany upon learning of the girls’ disappearance—but Elizabeth has another reason for wanting to come home, one she is not willing to reveal. Despite resistance from the community, who believe the girls to be dead, the family persists in their efforts to find the two sisters. When what happened to them is revealed, the uproar that ensues tears apart families, reputations, and even the social fabric of the city, exposing dark secrets about some of the most powerful of its citizens, and putting fragile loves and lives at great risk (summary from Goodreads).

First let me say this. While this book is the second in a series, I think it would read ok as a standalone, though reading the first book would be helpful, it’s not necessary to the plot so don’t fear that you will be lost in the plot on this one.

This was a difficult novel to read for one reason alone…the abuse of the girls. As a parent I found it really hard to read about what the girls endured but at the same time it propelled the novel forward because I needed to know that they would be ok or get some justice. The things these girl endure are horrifying so just be ready for some feelings when you read this book.

The book had it’s slow moments somewhere in the middle and it started to drag a little for me. It starts out fast like jumping right into the snow storm fast, but then it starts to drag a little but picks up eventually and it’s full steam ahead until the ending. Even though the abuse sections were hard to read, I think they actually helped move the story along to the resolution.

The main characters were well suited in their roles within the book. I liked Mary and thought she was a compelling and interesting character with an interesting life. Hence why I want to read the first book in the series. Each character and the historical content clearly had been thought through, researched, and sketched. I loved seeing not just the characters but the historical elements leap off the page. Oliveria writes with a daft hand—history, interesting characters, and an emotional plot–all winning concepts and well executed.

So why the four star review? For me the middle lost a little steam. I would love to see some of the middle sections pared down a little so that the main plot could move more quickly. This book will appeal to a certain kind of reader. If you love historical fiction and historical thrillers this will be an outstanding read but you just need to be ready for the graphic content. It’s not your typical historical fiction read–it’s something much darker and gritty than one would expect but for that I was completely into it. I loved reading something not in the same mould as all the other historical fiction or historical thrillers. This was different in so many ways and it was fantastic!

One final note…..the cover art is stunning. It doesn’t exactly scream thriller but it is so lovely and stands out. If I saw it in a book store I would pick it up right away and buy it. I love the snow and the horse and sleigh on the front. It’s eye catching. It doesn’t scream thriller but it doesn’t scream ‘run of the mill historical fiction’ either. Perhaps it’s the red of the sleigh, but something makes this stand out and I love it!