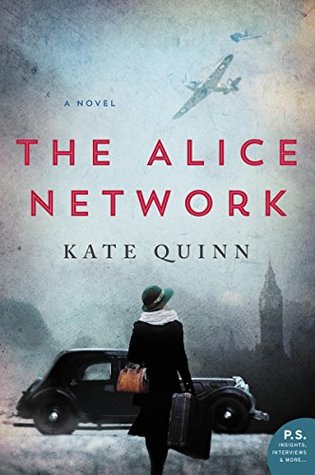 This book was everywhere last year. It was first published in June of 2017 and it’s been every where ever since. All over my social media, on all my friends ‘to read’ or ‘favorite’ shelfs, and at my local library as a librarian favorite.

It sounded like something that would be right up my alley, but for some reason it just didn’t scream ‘read me’ even though I had it sitting in my Kindle library for months. Part of me was worried about the hype and another part of me just wasn’t into reading a war time friendship story as I prefer war time romances generally.

However, this last month on the #historicalfix chat on Twitter, this was the featured book and there was a Q & A with Kate Quinn and after following along with the chat I was curious and eager to check this book out after all this time.

In an enthralling new historical novel from national bestselling author Kate Quinn, two women—a female spy recruited to the real-life Alice Network in France during World War I and an unconventional American socialite searching for her cousin in 1947—are brought together in a mesmerizing story of courage and redemption.

1947. In the chaotic aftermath of World War II, American college girl Charlie St. Clair is pregnant, unmarried, and on the verge of being thrown out of her very proper family. She’s also nursing a desperate hope that her beloved cousin Rose, who disappeared in Nazi-occupied France during the war, might still be alive. So when Charlie’s parents banish her to Europe to have her “little problem” taken care of, Charlie breaks free and heads to London, determined to find out what happened to the cousin she loves like a sister.

1915. A year into the Great War, Eve Gardiner burns to join the fight against the Germans and unexpectedly gets her chance when she’s recruited to work as a spy. Sent into enemy-occupied France, she’s trained by the mesmerizing Lili, the “Queen of Spies”, who manages a vast network of secret agents right under the enemy’s nose.

Thirty years later, haunted by the betrayal that ultimately tore apart the Alice Network, Eve spends her days drunk and secluded in her crumbling London house. Until a young American barges in uttering a name Eve hasn’t heard in decades, and launches them both on a mission to find the truth…no matter where it leads (summary from Goodreads).

Ok let’s first just say wow. This was a fantastic novel but because it was so fantastic I find that I want to talk about every little detail and examine precisely what worked and what didn’t.

This story was innovative and unique. I loved that it spread across both wars, because of that I thought that it demonstrated how very similar both wars were. I think it’s easy to separate WWI and WWII into two very different wars—when in fact many of the lingering animosity from the first WW carried over and impacted WWII. Having this book set in both periods really drove that point home.

The angle of the story…..marvelous. I loved the two heroines and their two alternating perspectives. Eve was simply a badass brazen bitch who was kicking ass and taking names. Truly no fear. Where as Charlie was more of the strong silent type in many ways. She was held down by her family and situation and really came into her own and found her voice in this book—where as Eve was the fearless heroine who was ready to sacrifice everything not just for her country but for her friends.

To be honest, I liked Eve substantially more than I liked Charlie. How could you not admire someone that was so bold? Now that said, I don’t know that the alcoholic angle worked for me. I understand why the author went this route—-it’s logical and makes sense given the period and it worked better than an opium addict, however I felt like Eve had been through so much and was so stoic in the beginning that I almost had a hard time believing that she was this maniac alcoholic ready to off her self at various points. I understand the reasoning behind it but it doesn’t mean that I liked it. Did it fit within the period and the circumstance? Yes but I don’t know that it entirely fit her character for me.

Charlie was brave in her own ways and I liked her story line, I just felt like Eve’s overshadowed hers. Charlie’s demons were different and I liked the modernness of her demons. I also liked the romantic story between her and Finn, however I think the author needed to really play up Finn’s troubled past. Finn was the most flat character of all and maybe it was meant to be that way but the fact that he was featured so heavily in the story made me need to see more development in his story or background. Half the time I was wondering why he was even here other than as a romantic interest for Charlie. Finn fell short compared to the other two principal characters. I also found myself wondering if the romance was even necessary for this novel.

I mean I liked the romance just fine—I am the persons who loves war romances so I should be really into the Charlie and Finn romance and Eve’s romantic angles. However I just wasn’t into Charlie’s romance. Eve’s was fine because the romance didn’t eclipse her character. With Charlie I felt like too much of her character was wrapped up in the romance. Maybe what I am trying to say is, I basically just wanted to read Eve’s story. While I liked the two merging plots of Eve and Charlie—ultimately I was way more invested in Eve’s story and just wanted to read about her.

So where does that leave us review rating wise? This is an easy 5 star review. While there were elements that weren’t my favorite and things I would have changed, it wasn’t substantial enough for my to rate it lower than 5 stars. This was a fantastic novel and I would highly recommend it—especially for book clubs. I thought Eve’s profession and choices would make for a great group discussion.

There are two kinds of flowers when it comes to women…the kind that sit safe in a beautiful vase, or the kind that survive in any conditions…..even in evil.

2 thoughts on “Review: The Alice Network by Kate Quinn”