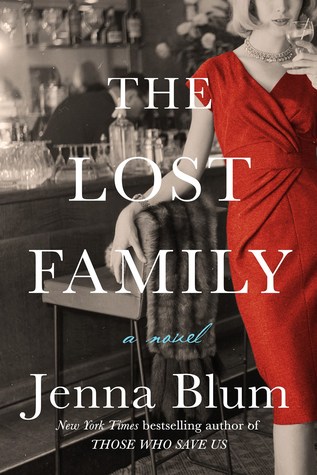 This was a book that I actually passed on initially. Yes it sounded good and like something that would be right up my alley. But my summer reading schedule always fills up so fast and I just didn’t have room for this book so basically I had to pass.

I did however agree to do a special feature on this book as I think it would appeal to many of my readers. As I was working on the special feature, I felt really sad that I wasn’t reading this book because it sounded so good.

After some very aggressive reading and maneuvering, I was able to fit this book in. There were many times that I stayed up way later than I should have reading this book…..not just so I could finish it, but because it was an excellent read!

The New York Times bestselling author of Those Who Save Uscreates a vivid portrait of marriage, family, and the haunting grief of World War II in this emotionally charged, beautifully rendered story that spans a generation, from the 1960s to the 1980s

In 1965 Manhattan, patrons flock to Masha’s to savor its brisket bourguignon and impeccable service and to admire its dashing owner and head chef Peter Rashkin. With his movie-star good looks and tragic past, Peter, a survivor of Auschwitz, is the most eligible bachelor in town. But Peter does not care for the parade of eligible women who come to the restaurant hoping to catch his eye. He has resigned himself to a solitary life. Running Masha’s consumes him, as does his terrible guilt over surviving the horrors of the Nazi death camp while his wife, Masha—the restaurant’s namesake—and two young daughters perished.

Then exquisitely beautiful June Bouquet, an up-and-coming young model, appears at the restaurant, piercing Peter’s guard. Though she is twenty years his junior, the two begin a passionate, whirlwind courtship. When June unexpectedly becomes pregnant, Peter proposes, believing that beginning a new family with the woman he loves will allow him to let go of the horror of the past. But over the next twenty years, the indelible sadness of those memories will overshadow Peter, June, and their daughter Elsbeth, transforming them in shocking, heartbreaking, and unexpected ways.

Jenna Blum artfully brings to the page a husband devastated by a grief he cannot name, a frustrated wife struggling to compete with a ghost she cannot banish, and a daughter sensitive to the pain of both her own family and another lost before she was born. Spanning three cinematic decades, The Lost Family is a charming, funny, and elegantly bittersweet study of the repercussions of loss and love (summary from Goodreads).

This is a new to me author and not one that I have heard a whole lot about. I gathered from the summary and pitch that she was a best selling author but yet I hadn’t heard or read any of her books—which is not unusual but sometimes I am a get a little wary that maybe the author was on the best seller list but way down the list or in some weird random capacity. Seeing as how I don’t actually live under a rock when it comes to literature, when I haven’t heard of a ‘best selling author’, I sometimes get a little nervous about picking a book up.

This book was an excellent read though. I am now shocked that I haven’t heard of this author before! Her writing skills are sharp and well honed and the story it self is the right mixture of sadness, pain, and hope. It’s set in kind of this obscure period after WWII where society is dealing with the fall out of a post war world. It’s a time period that I haven’t read too much about. Most of the 1960s books I’ve read have been historical based for my masters or more focused on space race or politics and not the politics or fall out from a world war twenty years previously.

I liked how well the setting worked and the idea of an older man and younger woman trying to make the best of things romantically and in their lives. This book is definitely not a short easy read. It’s an emotional read with characters that battle many demons in their lives and try to over come their situations. While I wasn’t looking for an emotionally heavy book, I admired the spirit of the characters and how they worked so hard to over come their past. I loved that this was a book that explored a lot of different angles…..family, loss, guilt, romance. So many elements and each one powerful.

This was an outstanding read and one that kind of snuck up on me. I wasn’t expecting to like this book as much as I did. I read it very quickly (not because I had to but because it was so moving), this was one of those times that I was so so so thankful that I did not pass on this book and that I made room for it in my schedule. It was a moving, emotional roller coaster, have tissues ready with this one! I hope to see this one high up on the best seller list, because it has earned it!