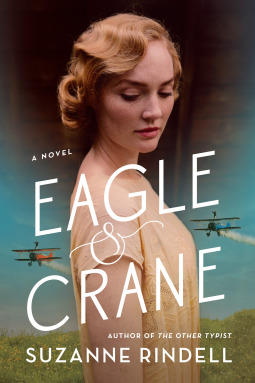 This was a book that I wasn’t really that excited to read when it initially came up for review. In my mind all I kept thinking was….ugh another WWII book. Don’t get me wrong, WWII is one of my favorite periods to read about, but lately I’ve read a lot of WWII books and I just wasn’t in the mood for another when it was time to review this one.

My brother in law’s grandparents spent time in Japanese interment camps during the war so I have heard about these camps through my brother in law’s stories. That was why I agreed to review this book—I was intrigued by the possibly of something different when it came to WWII stories.

Two young daredevil flyers confront ugly truths and family secrets during the U.S. internment of Japanese citizens during World War II, from the author of The Other Typist and Three-Martini Lunch.

Louis Thorn and Haruto “Harry” Yamada — Eagle and Crane — are the star attractions of Earl Shaw’s Flying Circus, a daredevil (and not exactly legal) flying act that traverses Depression-era California. The young men have a complicated relationship, thanks to the Thorn family’s belief that the Yamadas — Japanese immigrants — stole land that should have stayed in the Thorn family.

When Louis and Harry become aerial stuntmen, performing death-defying tricks high above audiences, they’re both drawn to Shaw’s smart and appealing stepdaughter, Ava Brooks. When the Japanese bomb Pearl Harbor and one of Shaw’s planes mysteriously crashes and two charred bodies are discovered in it, authorities conclude that the victims were Harry and his father, Kenichi, who had escaped from a Japanese internment camp they had been sent to by the federal government. To the local sheriff, the situation is open and shut. But to the lone FBI agent assigned to the case, the details don’t add up.

Thus begins an investigation into what really happened to cause the plane crash, who was in the plane when it fell from the sky, and why no one involved seems willing to tell the truth. By turns an absorbing mystery and a fascinating exploration of race, family and loyalty, Eagle and Crane is that rare novel that tells a gripping story as it explores a terrible era of American history (summary from Goodreads).

This book was a dark horse for me. I wasn’t excited about it, but yet by the end I was engrossed in the story. This is a new to me author but one that quickly proved her abilities in this book. When I first read the description of this book, I thought that it would be more focused on the investigation/mystery and not have any romance in it. The cover suggests a possible romance, but the summary really gave minimal hints that a romance would be a big part of the story. So, I was surprised that there was a rather well written love triangle and love story mixed throughout the story.  I’m always a sucker for love triangles—especially when they are done right—which was the case with this book. I loved the development of the romance and watching the characters navigate it.

There were a lot of exciting things happening in this book—romance, adventure, mystery, history. I personally loved the adventure feel of this one and how well the romance highlighted different angles of the story. I would hesitate to label this book just a romance because there are so many different elements that go into making this a great read.

The only downside for me was that some of the dialogue seemed a little contrite or basic, and lacked some luster. Some parts of the book were a little on the slow side but the majority moved fairly well. If you focus on the story itself, I think readers will enjoy the overall narrative. While there are a few stylistic things that bugged me, the overall story was well done and engaging. As I said, this book came in like a dark horse and I ended up liking it way more than I was expecting!