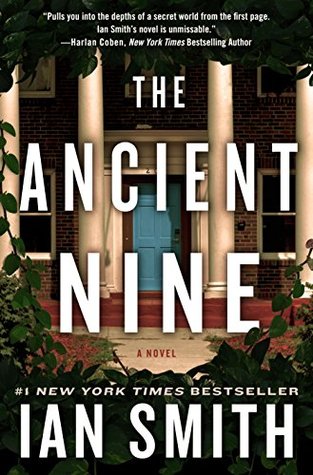 So I mostly picked up this book because it was set at Harvard. My sister works there and I’ve been back to visit and it makes such a great setting for any number of books. I was intrigued by the title and the mysterious club that this book centers around.

Spencer Collins thinks his life at Harvard will be all about basketball and pre-med; hard workouts and grinding work in class. The friends he’s made when he hits the storied ivy-clad campus from a very different life in urban Chicago are a happy bonus. But Spencer is about to be introduced to the most mysterious inner sanctum of the inner sanctum: to his surprise, he’s in the running to be “punched” for one of Harvard’s elite final clubs.

The Delphic Club is known as “the Gas” for its crest of three gas-lit flames, and as Spencer is considered for membership, he’s plunged not only into the secret world of male privilege that the Gas represents, but also into a century-old club mystery. Because at the heart of the Delphic, secured deep inside its guarded mansion club, is another secret society: a shadowy group of powerful men known as The Ancient Nine.

Who are The Ancient Nine? And why is Spencer—along with his best friend Dalton Winthrop—summoned to the deathbed of Dalton’s uncle just as Spencer is being punched for the club? What does the lore about a missing page from one of Harvard’s most historic books mean? And how does it connect to religion, murder, and to the King James Bible, if not to King James himself?

The Ancient Nine is both a coming of age novel and a swiftly plotted story that lets readers into the ultimate of closed worlds with all of its dark historical secrets and unyielding power (summary from Goodreads).

This book had a lot to recommend itself. A mysterious club at America’s most prestigious institute, a very thinking and intellectually driven mystery full of questions. At first glance the summary for this book seems to have a lot of different components….how would the King James Bible fit into Harvard? It sounds unrelated and a little all over the place, but as you read the book, you will find that it’s really not scatter brained in the way that I thought it would be.

Everything weaves together and the mystery itself fits perfectly into the intellectual institute itself. I expected this book to be smart and it is on many levels. So why the three star rating if it had an interesting mystery that was intelligent and unique? For me, the female aspect.

This book is very much meant to be about male privilege and ‘good old boys clubs’ and had a lot of ‘locker room talk’. This book was set in the 1980s and yes male privilege was very much a thing at prestigious institutes such as this. Many of the students at Harvard (and similar institutes) are rich white males who thrive on the boys only mentality and good old boys clubs. In that respect, the author did a great job being true to reality—-but that doesn’t mean that it was any easier to read—-especially for a female reader.

The way that the male characters talked about women and treated them, was in a word—terrible. I had a hard time getting past that as a female reader. On one hand I liked how the author really stayed true to the concept of male privilege, but at the same time I felt like it was too ‘in your face’ and it was a little off putting.

I loved the mystery parts but some of the aspects of the plot just weren’t for me. Does that mean this wasn’t a good read? No, not at all. By all means, read this for the mystery because the mystery is smart and interesting, just be ready for large doses of ‘locker room’ talk and female objectification. Do I think the author thinks this way about women? No I don’t. I think he is writing within the scope of the time period, setting, and characters in a way that other writers might talk about slavery etc, but again that doesn’t make it any easier to read.