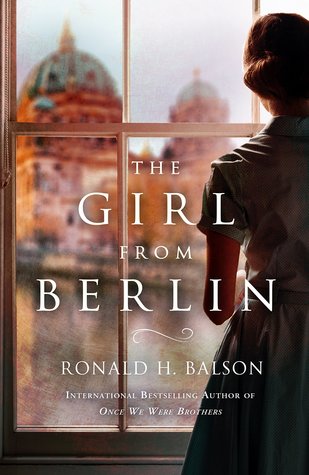 I needed little convincing when this one came up for review. The cover is beautiful and it’s set in pre war Italy. It was an easy yes for me.

I didn’t know that this book was part of a series when I agreed, and honestly I don’t think that it mattered too much with this one. Sure there is a backstory between Liam and Catherine, but the heart of the book is the mystery and the historical details of Ada’s plot line.

An old friend calls Catherine Lockhart and Liam Taggart to his famous Italian restaurant to enlist their help. His aunt is being evicted from her home in the Tuscan hills by a powerful corporation claiming they own the deeds, even though she can produce her own set of deeds to her land. Catherine and Liam’s only clue is a bound handwritten manuscript, entirely in German, and hidden in its pages is a story long-forgotten…

Ada Baumgarten was born in Berlin in 1918, at the end of the war. The daughter of an accomplished first-chair violinist in the prestigious Berlin Philharmonic, and herself a violin prodigy, Ada’s life was full of the rich culture of Berlin’s interwar society. She formed a deep attachment to her childhood friend Kurt, but they were torn apart by the growing unrest as her Jewish family came under suspicion. As the tides of history turned, it was her extraordinary talent that would carry her through an unraveling society turned to war, and make her a target even as it saved her, allowing her to move to Bologna―though Italy was not the haven her family had hoped, and further heartache awaited.

What became of Ada? How is she connected to the conflicting land deeds of a small Italian villa? As they dig through the layers of lies, corruption, and human evil, Catherine and Liam uncover an unfinished story of heart, redemption, and hope―the ending of which is yet to be written (summary from Goodreads).

This book should have been a quick read for me but I confess, I struggled and didn’t read it nearly as quickly as I had hoped. The plot crosses between 2017 and the 1930s, and while I loved the 1930s part, the modern period was wanting for me.

Ada’s story is where Balson shines. The history and depth of feelings that the characters are feeling are finely drawn and interesting. But when we shift back to the modern period, the shine of history dissolves leaving the reader feeling a little disappointed.

Ada’s story is interesting and inviting. I can only imagine what it would have been like for a young girl growing up in Berlin at the rise of Nazi Germany’s power. I loved how elegantly the music was woven into the plot.

Balson is a strong writer when it comes to weaving history and mystery together, but I personally felt like the modern period just needed something more—-though I am not sure what, I just felt like it needed something else to make it balance with the beauty of the historical period. Writing in two periods can sometimes be a challenge. Having not read any other books by Balson, I don’t really have a comparison or reference to his ability to blend the two, but this novel just felt like an unbalanced to me when it came to richness in plot both historic and modern.

I enjoyed Ada’s story and uncovering the mystery—-for me this was a good novel—-not great but entertaining. I just didn’t love it in the way that I had hoped.