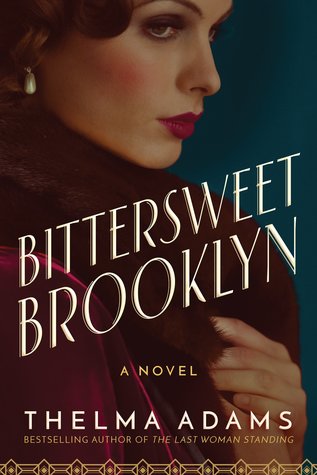 As many of you know, I am a sucker when it comes to pretty covers. I love the elegance of this cover. Not only does the woman on the cover seem intriguing, but the text and the angle suggested that it was going to be a little more edgy, almost like a classic noir film or something.

After reading the description, I was eager to start reading it. It sounded a little like The Godfather and I was excited to read something a little more edgy and different in the historical fiction genre.

Often in historical fiction, the mobster world goes untapped and I love mob movies and I often wonder why I don’t see more mobster style historical fiction books? Maybe they are out there and I just haven’t found them, but either way I was excited that this one had come across my desk for review.

n turn-of-the century New York, a mobster rises—and his favorite sister struggles between loyalty and life itself. How far will she go when he commits murder?

After midnight, Thelma Lorber enters her brother Abie’s hangout under the Williamsburg Bridge, finding Jewish mobster Louis “Pretty” Amberg in a puddle of blood on the kitchen floor. She could flee. Instead, in the dark hours of that October 1935 night before the dawn of Murder, Inc., she remains beside the fierce, funny brother who has nurtured and protected her since childhood. There are many kinds of love a woman can feel for a man, but few compare to that of the baby sister for her older brother. For Thelma, a wild widow tethered to a young son, Abie is the center of her world. But that love is about to undo everything she holds dear…

Flipping the familiar script of The Sopranos, Boardwalk Empire, and The Godfather, Bittersweet Brooklyn explores the shattering impact of mob violence on the women expected to mop up the mess. Winding its way over decades, this haunting family saga plunges readers into a dangerous past—revealed through the perspective of a forgotten yet vibrant woman (summary from Goodreads).

Right off the bat, this book was totally different than I was expecting, but in a good way. My initial thoughts based on the summary and cover were that it would be maybe be more ‘mobster lite’. Meaning that the mob would be mostly a background within the story.

Yes, in a way the mob was more of a backdrop with the family sage actually being front and center. However, it was impossible to have one without the other so I would say that this wasn’t just a book about a girl who grew up in a mob family, nor was it a book just about the mob. It was a well balanced blend of the two.

I really loved the immigrant and family dynamic. This set the book apart from just another historical fiction read. The author offers a gripping view into a very specific time in American history and makes it very relatable and interesting. I loved reading the city descriptions and felt like I was there living it.

This book was a lot more heavy than I was anticipating and there is a good amount of violence in the narrative, however I don’t think that it distracted from the story. If anything it added to the authenticity of the period and the cultural/family dynamic the author was trying to showcase.

Even though the story was wonderful and meant to be heavy, there was a part of me that felt so bad for protagonist. She went through hell and I just felt so sad for her all the time and for that reason I went with a 4.5 star rating. It was an excellent book but it left me feeling a little too sad in the end.

Thelma Adams is the author of the best selling historical novel The Last Woman Standing and Playdate, which Oprah magazine described as “a witty debut novel.” In addition to her fiction work, Adams is a prominent American film critic and an outspoken voice in the Hollywood community. She has been the in-house film critic for Us Weekly and The New York Post, and has written essays, celebrity profiles and reviews for Yahoo! Movies,The New York Times, O: The Oprah Magazine, Variety, The Hollywood Reporter, Parade, Marie Claire and The Huffington Post. Adams studied history at the University of California, Berkeley, where she was valedictorian, and received her MFA from Columbia University. She lives in upstate New York with her family.

Wednesday, January 30
Guest Post at To Read, Or Not to Read

Thursday, January 31
Review & Interview at Passages to the Past

Saturday, February 2
Excerpt at Maiden of the Pages

Sunday, February 10
Feature at What Is That Book About

Friday, February 15
Excerpt at Broken Teepee
Review at Comet Readings
Review at CelticLady’s Reviews
Excerpt at Spellbound by History
Review at Oh, The Books She Will Read

During the Blog Tour we will be giving away two paperback copies and one Audio Book! To enter, please use the Gleam form below.

– Giveaway ends at 11:59pm EST on February 15th. You must be 18 or older to enter.
– Giveaway is open to US only.
– Only one entry per household.
– All giveaway entrants agree to be honest and not cheat the systems; any suspect of fraud is decided upon by blog/site owner and the sponsor, and entrants may be disqualified at our discretion.
– Winner has 48 hours to claim prize or new winner is chosen.