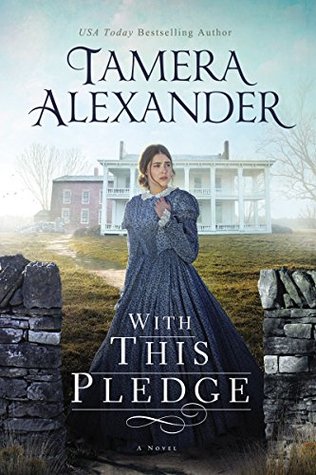 This is my first Tamera Alexander book, though I have had her books on my TBR radar for quite some time. I think her covers are beautiful and there is something about southern belles and romances that I can’t get enough of. But yet, I haven’t moved her books up on my TBR list for some unknown reason.

I was thrilled when this book came up for review because it gave me the perfect excuse to read one of her books, but then I forgot that I had it coming up soon.

When I started looking at my calendar I realized that I hadn’t even started it yet and to be honest, I was really wanting to read another book instead. But being part of a tour leaves little room for flexibility. Reluctantly, I picked up this book to read one night, and the next thing I knew, it was well after midnight.

On the night of November 30, 1864, a brutal battle in Franklin, Tennessee, all but decimates the Confederacy and nearly kills Captain Roland Ward Jones. A decorated Mississippi sharpshooter, Jones has a vision on the battlefield and, despite the severity of his wounds, believes his life will be spared. But a life without his leg, he can’t abide. He compels Elizabeth “Lizzie” Clouston—governess to the McGavock family at the Carnton mansion—to intervene should the surgeon decide to amputate. True to her word, Lizzie speaks on his behalf and saves not only the captain’s leg but also his life.

When a fourteen-year-old soldier dies in Lizzie’s arms that night, the boy’s final words, whispered with urgency, demand that Lizzie deliver them to their intended recipient. But all she has is the boy’s first name. And, as she soon discovers, there’s no record of him ever having enlisted. How can she set out alone across a land so divided by war and hatred to honor her pledge? Even more, does she dare accept Captain Jones’s offer to accompany her? As he coalesces at Carnton, romance has blossomed between him and Lizzie—a woman already betrothed to a man she does not love.

From the pages of history and the personal accounts of those who endured the Battle of Franklin, Tamera Alexander weaves the real-life love letters between Captain Roland Ward Jones and Elizabeth Clouston into a story of unlikely romance first kindled amid the shadows of war (summary from Goodreads).

I was unbelievably captivated by this novel. From the very beginning, I couldn’t put it down. Not only was the romance well drawn, tender and a slow burn, the history was riveting. I did my master’s thesis on women in Civil War nursing focusing on the Confederacy, so to say this book was literally written for me is a vast understatement.

Going into this one, I had no idea this was all based on real characters and real locations. Real events I knew about, but I didn’t know that the characters and their stories were all real for the most part. I was blown away with all of Alexander’s research. It was incredible and for someone who loves Civil War history, it earned its five stars on that fact alone. I have been raving about this book to everyone I know because of all the historic details!

The characters though were equally engaging. I loved the romance between Lizzie and Captain Jones. It was full of obstacles to overcome together and it wasn’t rushed or too fast. I loved watching them workout their issues and seeing how things resolved between them. It was also a pleasure to watch how their feelings evolved and became stronger as the book went on. It was a beautiful love story and I found the book well balanced between the historical points, the religious message (this is a Christian fiction book), and the romance.

An absolutely beautiful book, I went out and bought two more books by Alexander and I can’t wait to start reading them! What an incredible writer!

Free review copy provided by Thomas Nelson Publishing and TLC Book Tours in exchange for an honest review. All opinions are my own and in no way influenced.

Tuesday, January 22nd: Diary of a Stay at Home Mom

4 thoughts on “Review: With this Pledge (Carnton #1) by Tamera Alexander”