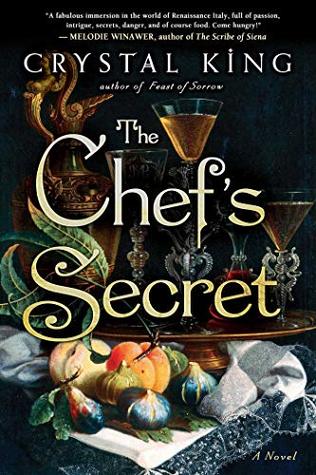 When I first saw this title, it made me hungry.

The cover art did nothing to help that situation either. The trey of wine and fruit looks so appealing and I couldn’t help but think that I needed to crack open a bottle of wine to commemorate the beginning of this book!

Now if truth be told—I am neither a foodie or a wine drinker, but for this book I felt like I totally could be! I thought it sounded like a fun and interesting story told in a unique setting–so I said yes to reading it.

My sister got me a book on famous recipes from different Pope’s for Christmas and I thought this book would pair nicely with the book she got me!

A captivating novel of Renaissance Italy detailing the mysterious life of Bartolomeo Scappi, the legendary chef to several popes and author of one of the bestselling cookbooks of all time, and the nephew who sets out to discover his late uncle’s secrets—including the identity of the noblewoman Bartolomeo loved until he died.

When Bartolomeo Scappi dies in 1577, he leaves his vast estate—properties, money, and his position—to his nephew and apprentice Giovanni. He also gives Giovanni the keys to two strongboxes and strict instructions to burn their contents. Despite Scappi’s dire warning that the information concealed in those boxes could put Giovanni’s life and others at risk, Giovanni is compelled to learn his uncle’s secrets. He undertakes the arduous task of decoding Scappi’s journals and uncovers a history of deception, betrayal, and murder—all to protect an illicit love affair.

As Giovanni pieces together the details of Scappi’s past, he must contend with two rivals who have joined forces—his brother Cesare and Scappi’s former protégé, Domenico Romoli, who will do anything to get his hands on the late chef’s recipes.

With luscious prose that captures the full scale of the sumptuous feasts for which Scappi was known, The Chef’s Secret serves up power, intrigue, and passion, bringing Renaissance Italy to life in a delectable fashion (summary from Goodreads).

So to be fair, when I was pitched this book, it was months ago and I had a lot of openings on my review schedule in the late winter to fill, so this sounded like a good idea at the time and then I kind of forgot about it.

Then I started seeing all these posts on my social media about this book and I was like oh ya, I have that one coming up! So I had renewed interest in it. I was even inspired to try a new recipe from my Pope cookbook in honor of this book!

So as I suspected with this novel, I was hungry throughout most of it. King writes with such deliciousness that I was longing for food all hours of the day and night while reading this one!

I was very surprised by how much I liked this book. On the surface I thought it was going to be basically a foodie book with some mystery, but it was so much more than that. It was part love story, part mystery/intrigue, with a healthy dosing of history and food! I loved it!

One of the things that I loved most about this book was the multiple layers of mystery. It wasn’t just about a murder, there is a ton of intrigue surrounding the murder and a ton of secrets to be ferreted out. I loved reading such a richly written novel lithesome enticing historical elements thrown in. As a Catholic myself, I am obviously going to be drawn to something set within the Vatican and this book was no different.

This book came in like a dark horse for me. I wasn’t ready to love it as much as I did, and it was one I was thinking about throughout the day, eager to return to and find out what was happening next!

Kindle Edition, 352 pages
Published February 12th 2019 by Touchstone
ASIN B07GNVBYPR
Free review copy provided by publisher, Atria Books, in exchange for an honest review. All opinions are my own and in no way influenced.
Rating: 5 stars
Genre: historical fiction, mystery

3 thoughts on “Review: The Chef’s Secret by Crystal King”