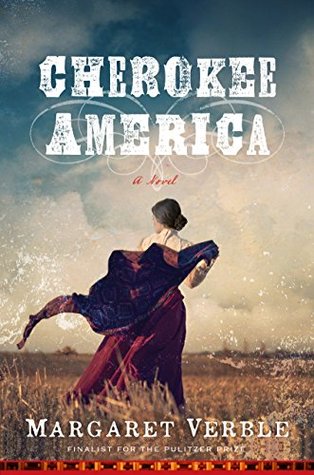 This book intrigued me for one reason—it sounded different. This is an ‘Own Voices’ book so I loved that it would be more about people on the fringes and as a historian this book held a lot of appeal to me.

It weaves Native American culture with a more traditional family narrative all set in a post Civil War world to create something unique and new. Based on that promise, I was eager to read this and see how it all worked together.

I haven’t read a lot of books set on the frontier or with Native American culture mixed in, so something like this book appealed to my curious side. Not to mention this cover is beautiful and eye catching so I didn’t want to miss out on it!

It also helps that the author was a finalist for the Pulizter Prize which says to me that it would be a well written book.

It’s the early spring of 1875 in the Cherokee Nation West. A baby, a black hired hand, a bay horse, a gun, a gold stash, and a preacher have all gone missing. Cherokee America Singer, known as “Check,” a wealthy farmer, mother of five boys, and soon-to-be widow, is not amused.

In this epic of the American frontier, several plots intertwine around the heroic and resolute Check: her son is caught in a compromising position that results in murder; a neighbor disappears; another man is killed. The tension mounts and the violence escalates as Check’s mixed race family, friends, and neighbors come together to protect their community—and painfully expel one of their own.

Cherokee America vividly, and often with humor, explores the bonds—of blood and place, of buried histories and half-told tales, of past grief and present injury—that connect a colorful, eclectic cast of characters, anchored by the clever, determined, and unforgettable Check (summary from Goodreads).

This book had a lot going on. It was dense and tedious at times. There were a number of characters to keep track of so that was a bit of a distraction for me and it started a little on the slow side. I felt like I was so worried about who was related to who for the first third of the book until it finally became familiar. I have seen a few others comment on the same issue and I will admit, it was a struggle at first.

But eventually the characters became familiar and the list of how they are related helped a lot, and then the story started picking up and eventually I became engrossed in everything that was going on. I loved the backdrop of a post Civil War era. As I am sure many of you know, I am a huge Civil War buff, but mostly as it pertains to the South and nursing. I have done some research on frontier America but my research into Indian culture is extremely limited, so with this book I found something new and fresh to relish in during one of my favorite eras of American History.

This isn’t a book that you want to rush through. I did aggressively read this one admittedly, but mostly because I was eager to make headway with it. I thought the research the author poured into this book was commendable and did the time period, culture, and character justice. I especially loved Check, I thought she was an interesting character, she was strong and independent in a time when women had to rely on their man, she didn’t and I found her character fresh and invigorating. However, there was just so much going on for me that I periodically stalled in my reading efforts. I think it would have helped if all of the plot points to characters ended up connecting some how but sometimes it just didn’t have any bearing on the overall narrative.

In the end I went with 3 stars for this one. It was good and definitely worth a read especially if you are looking for an Own Voices type of book, but just be prepared that there is a lot going on in this one.

Friday, February 22
Review at Creating Herstory
Feature at What Is That Book About

Friday, March 1
Feature at View from the Birdhouse

Monday, March 11
Interview at Passages to the Past

Wednesday, March 13
Review at Passages to the Past

Friday, March 15
Review at bookramblings
Review at The Reading Woman

During the Blog Tour we will be giving away five copies of Cherokee America by Margaret Verble! To enter, please use the Gleam form below.

– Giveaway ends at 11:59pm EST on March 15th. You must be 18 or older to enter.
– Giveaway is open to US only.
– Only one entry per household.
– All giveaway entrants agree to be honest and not cheat the systems; any suspect of fraud is decided upon by blog/site owner and the sponsor, and entrants may be disqualified at our discretion.
– Winner has 48 hours to claim prize or new winner is chosen.