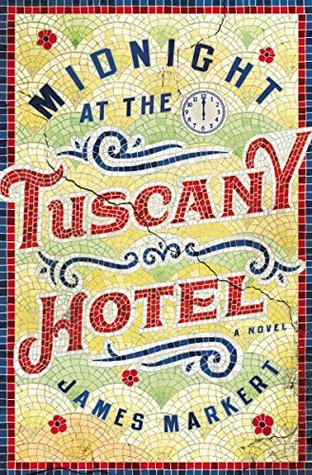 This was a book that I wasn’t really thinking about, until the time for me to start reading it was upon me.

For me, there was nothing that really stood out about it—not the cover, or the title, or even the description. I was beginning to wonder why I agreed to review it, but with a sigh, I had committed to reading it and thus I did.

As soon as I started reading it, I began to let me misconceptions and preconceived notions fall away, as this book indeed had a lot to recommend itself and I think that there will be a number of people that will love this book!

For years, guests of the Tuscany Hotel could leave their pasts behind and live among fellow artists. Now guests of a different sort fill the rooms, searching for their memories—no matter the cost.

Run by renowned sculptor Robert Gandy and his wife and muse, Magdalena, the Tuscany Hotel hosted guests of a certain kind—artists, actors, scientists, and engineers who left their worries behind so that they could create their latest masterpieces. Surrounded by lore, the hotel was rumored to free the mind and inspire artists’ gifts. But tragic circumstances force Robert and his family to move.

After thirteen months at war, Vittorio Gandy is haunted by memories, and his former life is unrecognizable. Once a gifted painter, now he can’t bear the vivid, bleeding colors on a canvas. His young son doesn’t remember him, and his wife, Valerie, is scared of him. But the most disconcerting change is in Vitto’s father, Robert Gandy, who has fallen from being a larger-than-life sculptor to a man whose mind has been taken by Alzheimer’s.

When Robert steals away in the night, Valerie, Vitto, and his new acquaintance and fellow veteran John go to the only place Robert might remember—the now-abandoned Tuscany Hotel. When they find him there, Robert’s mind is sound and his memories are intact.

Before long, word gets out that drinking from the fountain at the hotel can restore the memories of those suffering from Alzheimer’s and dementia. The rooms once again fill up with guests—not artists this time, but people seeking control over their memories and lives. Vitto desperately wants to clear his own mind, but as he learns more about his mother’s life and her tragic death, he begins to wonder whether drinking the water comes at a price.

A story of father and son, memories lost and found, artists and their muses, Midnight at the Tuscany Hotel explores the mysteries of the mind, the truth behind lore, and the miracle of inspiration (summary from Goodreads).

One of the things that I liked most about this book was the material. I think the premise and subject matter of the story is something most readers can easily relate to and that is the idea of the past. Is it something we should just leave well enough alone?

Right away I felt connected to the plot and the general idea for the book. I think that most readers will find that this notion of the past and reconciling with it, is something we all struggle with so readers will feel an instant connection I think.

The story is well written, it has a very lyrical quality to it which sets it aside and leave readers feeling like they read something elegant and relatable. For me though, I don’t know that I could fully appreciate this book. I personally am just not a huge fan of mythology. I mean, I want to be into it, but it’s just not my thing. In this book there was a lot go Greek mythology and for me, I just couldn’t appreciate it in the way that I think other readers could.

I know that a lot of people really loved this book, and I think there are certainly a lot of positives and things to enjoy, but for me I started to lose interest toward the end. I don’t know if it was the mythology references or not, but for me personally this one just landed as ok. I ended it with a 3 star review which for me falls into the ok category. I think that others might love this one, as it received a ton of high marks on Goodreads, but for me it as just ok.

Kindle Edition, 368 pages
Published April 9th 2019 by Thomas Nelson
ASIN B07DT7VJ8S
Free review copy provided by publisher, Thomas Nelson, in partnership with the TLC Book Tour in exchange for an honest review. All opinions are my own and in no way influenced.
Rating: 3 stars
Genre: magical realism, historical fiction

Tuesday, March 26th: All of a Kind Mom

Thursday, April 18th: Thoughts on This ‘n That

One thought on “Review: Midnight at the Tuscany Hotel by James Markert”