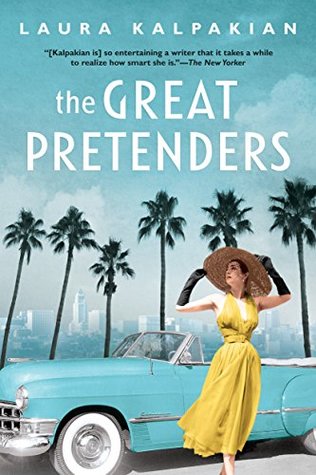 I decided to review this one because I have zero impulse control when it comes to pretty historical fiction book covers.

I love the eye catching teal and yellow color pallet in this cover and it so clearly screams 1950s Hollywood glamour and as soon as I saw it, I knew I wanted to read it. I didn’t even really read the pitch all the way through, I just eagerly agreed!

This author has written a number of other books but none that I have read or really heard of but she has won a number o literally awards. This book seems to be kind of her ‘break out’ novel in my opinion. Kind of more mainstream and widely appealing.

I also see she lives in the Pac NW (though I don’t know where, does anyone else know?) and one of her son’s, Bear McCreary, is responsible for the outstanding Outlander sound track so I was immediately interested in reading this book for the cover but ultimately my curiosity about the author and her exceptionally talented family drew me in and made me all the more excited to read this book!

Roxanne forges a career unique for women in the 1950s, becoming an agent for hungry young screenwriters. She struggles to be taken seriously by the men who rule Hollywood and who often assume that sexual favors are just a part of doing business. When she sells a script by a blacklisted writer under the name of a willing front man, more exiled writers seek her help. Roxanne wades into a world murky with duplicity and deception, and she can’t afford any more risks.

Then she meets Terrence Dexter, a compelling African American journalist unlike anyone she’s ever known. Roxanne again breaks the rules, and is quickly swept up in a passionate relationship with very real dangers that could destroy everything she’s carefully built.

Roxanne Granville is a woman who bravely defies convention. She won’t let men make all the rules, and won’t let skin color determine whom she can love. The Great Pretenders is a riveting, emotional novel that resonates in today’s world, and reminds us that some things are worth fighting for (summary from Goodreads).

Ok this author has done an incredible amount of research. So so so much historical detail and research must have gone into this novel. I also loved that this book wasn’t full of cliche troupes just to sell more books. I feel like the author stayed true to her vision for the book and focused on the racism and sexism that was rampant in Hollywood at this particular time.

One reviewer noted that while we live in 2019, has Hollywood really come that far since the 1950s when it comes to race and sex issues in the industry? After reading this, I am inclined to agree to a certain extent. I thought the author took on some pretty big issues in this book and I think it worked well.

This wasn’t just another feel good book about romance in Hollywood in the 1950s, instead she stuck to her theme in this book and really focused on the forbidden romance between Roxanne and Terrence and how that could ultimately destroy them in Hollywood.

I loved reading about Roaxanne. Her transformation was impressive and fit well in this book. She went from rich girl to this badass Hollywood agent. I loved seeing her evolve throughout the book.

So the bulk of this book is the middle. The beginning was a little slower than I expected and the end it seemed to lose a little momentum, which placed this book in a  3 star situation for me but I also felt like it was better than just 3 stars based on the historical research, so I rounded up to 3.5 stars!

Kindle Edition, 396 pages
Published April 16th 2019 by Berkley
ASIN B07FS2SXHM
Free review copy provided by publisher, Berkley, in exchange for an honest review. All opinions are my own and in no way influenced.
Rating: 3.5 stars
Genre: historical fiction

One thought on “Review: The Great Pretenders by Laura Kalpakian”