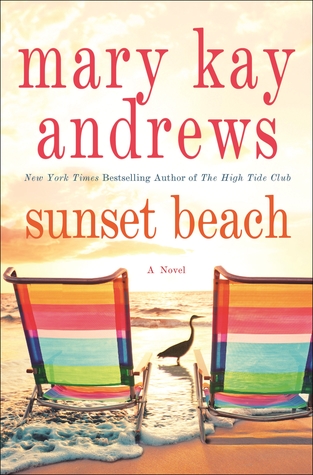 I’ve made it my mission this year to read more beach reads…..though not necessarily by choice.

In the past, I didn’t read a ton of beach reads, mostly because I didn’t really understand the appeal. If I am going to read, I want to read something with some depth. But then I had a kid and sometimes I just need easy, relaxing plots with a laid back vibe.

Plus after a read one of two beach reads, I discovered that they weren’t all full of  ‘flimsy’ plots that were predictable. In fact many were downright interesting!

When this book came up for review I saw that Mary Kay Andrews is kind of the unofficial beach read queen and I was interested to try out one of her books as I haven’t had the pleasure of reading anything by her before!

Drue Campbell’s life and career have recently been derailed. The only thing she has left is the house her mother left her: a ramshackle beach bungalow with a missing roof in the once-sleepy town of Sunset Beach, which is rapidly becoming a hot spot for the rich and well-heeled, who are none too pleased about the shabby eyesore in their perfect neighborhood.

When Drue’s larger-than-life father unexpectedly turns up at her mother’s funeral and offers her a job at his law firm, Drue doesn’t know whether to be grateful or resentful that he has suddenly reappeared. She grudgingly accepts the job sifting through cold callers and shysters looking to get rich quick. But when her attention is caught by a suspicious murder case, Drue finds herself entangled in a decades-old mystery – one that may have dire consequences for Drue and the people she loves (summary from Goodreads).

So first of all, I hated the name Drue. I don’t know if it was the spelling, the name itself or both, but I absolutely did NOT like this name for the main character. But I simply had to deal since I was hooked on this book relatively quickly!

I was kind of expecting this novel to be something along the lines of mothers/daughters or a romance novel based on the cover art, so imagine my surprise when Drue’s mother dies of cancer and then later on there’s a murder mystery in the book! I mean there was some romance in this book, but I loved how Andrews blended the murder mystery into the plot. It sounds like this is a fairly new approach for Andrews—at least according to her die hard fans on Goodreads. I haven’t read anything by her before, so I am a blank slate. I loved the blending of the mystery and I thought Andrews did a nice job for someone who doesn’t write mystery novels.

I can see why so many people love her books. She has some witty dialogue and an interesting plot mixed with so many different genres which kept things moving along and interesting. I would gladly read more of her books in the future because I walked away from this book feeling like I got a little of what I was expecting and a whole lot of what I wasn’t and I love being surprised!

Kindle Edition, 448 pages
Published May 7th 2019 by St. Martin’s Press
ASIN B07GNC2WRN
Free review copy provided by publisher, St Martin’s Press, in exchange for an honest review. All opinions are my own and in no way influenced.
Rating: 4 stars
Genre: women’s fiction