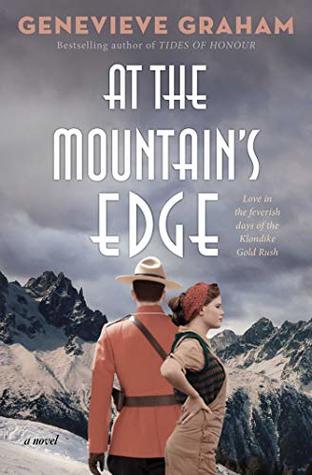 One of the things I enjoy most about blogging, is all the amazing authors that I get to interact with. I started corresponding with Genevieve Graham back in 2015 when Tides of Honour was first released. I read it and loved it!

Since then I have read just about all of her books and never come away feeling disappointed. She is a consistently solid writer and I find so much to love in all of her books.

When I saw that she had a new book being released that was set in the frontier, I was admittedly a little less than excited for the setting, as I am not a huge fan of the frontier. The books that I have read by Graham, have mostly been set during the World Wars….frontier life or the gold rush, just doesn’t appeal to me in any way as a backdrop. But as I said, she has consistently been a standout author for me, so I was eager to see how this story unfolded in a period that wasn’t really a favorite of mine.

In 1897, the discovery of gold in the desolate reaches of the Yukon has the world abuzz with excitement, and thousands of prospectors swarm to the north seeking riches the likes of which have never been seen before.

For Liza Peterson and her family, the gold rush is a chance for them to make a fortune by moving their general store business from Vancouver to Dawson City, the only established town in the Yukon. For Constable Ben Turner, a recent recruit of the North-West Mounted Police, upholding the law in a place overrun with guns, liquor, prostitutes, and thieves is an opportunity to escape a dark past and become the man of integrity he has always wanted to be. But the long, difficult journey over icy mountain passes and whitewater rapids is much more treacherous than Liza or Ben imagined, and neither is completely prepared for the forbidding north.

As Liza’s family nears the mountain’s peak, a catastrophe strikes with fatal consequences, and not even the NWMP can help. Alone and desperate, Liza finally reaches Dawson City, only to find herself in a different kind of peril. Meanwhile, Ben, wracked with guilt over the accident on the trail, sees the chance to make things right. But just as love begins to grow, new dangers arise, threatening to separate the couple forever.

Inspired by history as rich as the Klondike’s gold, At the Mountain’s Edge is an epic tale of romance and adventure about two people who must let go of the past not only to be together, but also to survive (summary from Goodreads).

Graham is a well known Canadian author, so all the books I have read so far have a Canadian tie and this book is no exception, but I loved that this book brought us to the western side of Canada to the rugged region of Vancouver. Having visited Vancouver before and being a Pacific NW native, I was drawn to this setting, even if the time period initially wasn’t a favorite.

Quite quickly though, I became less interested in the period and more interested in the characters and their story. This author always does such a wonderful job adding historical detail and descriptions in her novels and this book is no exception. There was enough detail to create clear feel and understanding of the period, but wasn’t so overwhelming that you felt like you were reading a history book. And even though the gold rush and frontier aren’t really my favorite historical period, I am a historian after all, and growing up in the PacNW, there is a multitude of frontier history littered throughout the region so I am definitely not a stranger to the period.

Fun random fact completely non-book related, my Girl Scout troop camped in a covered wagon in Eastern Oregon on the banks of the Oregon Trail Snake River crossing when I was a kid and my dad was also really into frontier history so most of my childhood was spent vacationing to random ghost towns, Indian pow-wows, and abandoned mining camps. So reading in this book about the conditions these pioneers faced felt not only authentic but also very realistic.

Beyond the historical research and descriptions, this novel has a wonderfully written romance that I could’t get enough of. As I said, this was a book ultimately about characters. There was heart break and emotion but also the promise of better things and love. I was a little surprised that the romance came so late in the book, that was my only issue with this one. I had hoped for more romance from the beginning but in the end, I felt satisfied with Liza and Ben’s story. I loved Liza, she was such a strong character and made this book worth reading.

This author truly captured the adventure spirit and romanticism of the frontier in this book and then added her own signature style romance to create a truly unique book! I haven’t read anything like it and I was happily engaged in this one each evening. If you haven’t discovered Graham’s books, you should definitely put her on your TBR list! Every book I have read by her has been wonderful and this one is no exception!

Kindle Edition, 368 pages
Published April 2nd 2019 by Simon & Schuster
ASIN B07GNVLF7J
Free review copy provided by author and publisher, Simon & Schuster, in exchange for an honest review. All opinions are my own and are in no way influenced.
Rating: 4.5 stars
Genre: historical fiction, romance