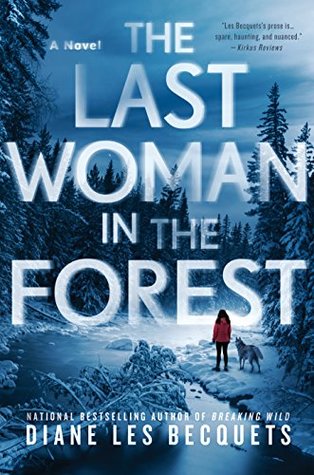 I wanted to read this book for entirely superficial reasons.

I loved the dog on the cover.

I know, I know, you can barely see the dog but I know it’s a husky and I have a husky so as a husky lover, I couldn’t pass this book up based on that alone. That and in the summary it sounded like said dog was going to be part of the book, as the main character worked with rescue dogs.

So that’s what roped me in initially, but then I read the description and I liked the sound of the thriller/suspense genre mixed with a romance aspect of the book, so I decided to give it a try.

Marian Engström has found her true calling: working with rescue dogs to help protect endangered wildlife. Her first assignment takes her to northern Alberta, where she falls in love with her mentor, the daring and brilliant Tate. When they’re separated on another assignment, she’s shattered to learn of his tragic death. Before long, Marian discovers disturbing inconsistencies about Tate’s life, and begins to wonder if the man she loved could have been responsible for the unsolved murders of at least four women.

Hoping to clear Tate’s name, Marian reaches out to a retired forensic profiler who’s haunted by the open cases. But as Marian relives her relationship with Tate and circles ever closer to the truth, evil stalks her every move (summary from Goodreads).

So this booked a bit of an identity crisis. It wasn’t bad—not at all. But I think it was a little misrepresented in some ways. The cover screams thriller to me with the summary supporting it. Though the summary suggests maybe more suspense than thriller but that’s neither here nor there.. As I was reading, I felt like this book was a little more about the romance.

It’s told between two alternating timelines with the main character, Marian, questioning everything she knew about the man she loved, Tate. There was a lot of time devoted to their relationship which made me feel like there was an awful lot of romance in this book that was supposed to be a thriller. Now don’t get me wrong, there was a darker mystery here, but there is quite a bit of relationship bits sprinkled throughout this book which is what made me wonder if it was having an identity crisis.

Normally I love books with alternating story timelines, but at times this one felt like some of the aspects of the timeline moved slowly. There was a lot of information and sometimes I felt that it was unnecessary the the greater story. I did love how vividly the author describes the scenery and setting. It felt very rugged and atmospheric. It was also evident that the author did  lot of research about rescue dogs. I loved the dogs and hearing about their work.

The plot/mystery itself was interesting and I liked seeing how the pieces fit together in the larger story. Though the story didn’t really become ‘fast paced’ for me until much later. I think this is a good book, but it just wasn’t as quick of a read as I was expecting. In the end I went with 3 stars, good but not great.

Kindle Edition, 351 pages
Published March 5th 2019 by Berkley
ASIN B07DMZ4P68
Free review copy provided by, Berkley Publishing, in exchange for an honest review. All opinions are my own and in no way influenced.
Rating: 3 stars
Genre: mystery, suspense, thriller

One thought on “Review: The Last Woman in the Forest by Diane Les Becquets”