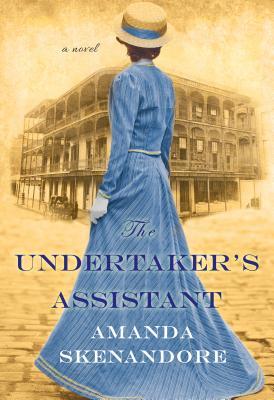 The setting of this book instantly caught my eye and made me want to read it. It is set in Reconstruction Era Louisiana and features an undertakers assistant as the heroine. As many of you know, my Masters thesis was on women in Civil War nursing specifically Southern nurses through the Reconstruction era.

So to say that this book caught my eye was an understatement—I was practically chomping at the bit to read it! I finished my Masters degree three years ago, and since then I have not read a ton of books set in the Civil War or Reconstruction eras mostly because I felt burnt out but every once in a while, a book catches my eye and I can’t resist it—hence this book.

The other thing that excited me about this book was the main character, who is a freed slave who returns to the South to work as an embalmer. I thought this was an interesting angle and was excited to see how it played out in the story.

“The dead can’t hurt you. Only the living can.” Effie Jones, a former slave who escaped to the Union side as a child, knows the truth of her words. Taken in by an army surgeon and his wife during the War, she learned to read and write, to tolerate the sight of blood and broken bodies–and to forget what is too painful to bear. Now a young freedwoman, she has returned south to New Orleans and earns her living as an embalmer, her steady hand and skillful incisions compensating for her white employer’s shortcomings.

Tall and serious, Effie keeps her distance from the other girls in her boarding house, holding tight to the satisfaction she finds in her work. But despite her reticence, two encounters–with a charismatic state legislator named Samson Greene, and a beautiful young Creole, Adeline–introduce her to new worlds of protests and activism, of soirees and social ambition. Effie decides to seek out the past she has blocked from her memory and try to trace her kin. As her hopes are tested by betrayal, and New Orleans grapples with violence and growing racial turmoil, Effie faces loss and heartache, but also a chance to finally find her place (summary from Goodreads)

There was a lot to process in this book. There was the historical elements that the author included, the character Effie, and of course the mystery itself. Effie was a difficult character for me to like at times. She was overly analytical at times and I had difficulty relating to her even though I can be equally as analytical and to the point, in this book I wasn’t sure that it completely worked for me.

The first half of the book I wasn’t sure that I really liked her all that much but by half way through I was starting to warm up to her and found her rather interesting by the end of the book. I just wish that I had liked her more in the beginning. The first part of the book is a little on the slow side, even though it picked up later in, it took a while for me to get into it and I didn’t read it as fast as I had anticipated.

Despite the pacing of the book and my conflicting opinions about Effie, I did enjoy the historical parts of the novel. I thought that the author took great care to provide the readers with the sociology of the South during the Reconstruction as well as some of the other cultural and social conflicts between the classes. The author also incorporated lots of French which helped add to the authenticity of the book and lots of medical terms which showed her research.

In the end this book fell into the 3 star category for me. It was good and had lots of potential, I look forward to seeing how this author progresses in future books!

Praise for Amanda Skenandore and Between Earth and Sky

“Gripping and beautifully written, Between Earth and Sky tugs at the heart with its dynamic heroine and unique cast of characters. Though this novel brings alive two historical American eras and settings, the story is achingly modern, universal and important.” –Karen Harper, New York Times bestselling author of The It Girls

“Intensely emotional. . . . Skenandore’s deeply introspective and moving novel will appeal to readers of American history, particularly those interested in the dynamics behind the misguided efforts of white people to better the lives Native American by forcing them to adopt white cultural mores.” –Publishers Weekly

“A masterfully written novel about the heart-wrenching clash of two American cultures . . . a fresh and astonishing debut.” –V.S. Alexander, author of The Magdalen Girls and The Taster

“By describing its costs in human terms, the author shapes tension between whites and Native Americans into a touching story. The title of Skenandore’s debut could refer to reality and dreams, or to love and betrayal; all are present in this highly original novel.” –Booklist

“A heartbreaking story about the destructive legacy of the forced assimilation of Native American children. Historical fiction readers and book discussion groups will find much to ponder here.” –Library Journal

“At its heart, this luminous book tells a Romeo and Juliet story. But Skenandore’s book is so much more than a simple romance. This novel examines the complex relationship between love and loss, culture and conquest, annihilation and assimilation.” –Historical Novel Society

Amanda Skenandore is a historical fiction writer and registered nurse. Between Earth and Sky was her first novel. She lives in Las Vegas, Nevada. Readers can visit her website at www.amandaskenandore.com.

Wednesday, July 24
Review at Coffee and Ink
Review at Reading the Past
Interview at Jathan & Heather
Review at Suzy Approved Book Reviews

Wednesday, July 31
Review at McCombs on Main
Interview at Jorie Loves A Story

Thursday, August 1
Review at A Chick Who Reads
Review at Clarissa Reads it All

Friday, August 2
Review at Based on a True Story

Saturday, August 10
Feature at What Is That Book About

Tuesday, August 13
Review at Reader then Blogger
Review at So Many Books, So Little Time

Thursday, August 15
Review & Interview at Passages to the Past

One thought on “Review: The Undertaker’s Assistant by Amanda Skenandore”