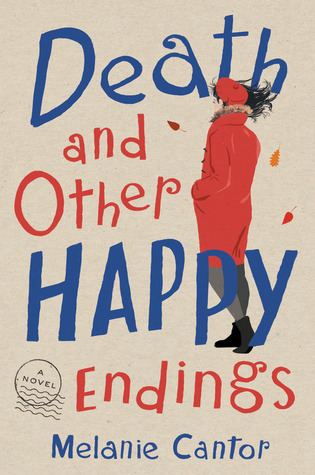 I snuck in little bits of this book here and there each day and before I knew it, I was completely invested in this book and quickly saw what the big fuss was all about!

Jennifer Cole has just been told that she has a terminal blood disorder and has just three months to live–ninety days to say goodbye to friends and family, and to put her affairs in order. Ninety days to come to terms with a diagnosis that is unfair, unexpected, and completely unpronounceable. Focusing on the positives (she won’t have to go on in a world without Bowie or Maya Angelou; she won’t get Alzheimer’s or Parkinson’s like her parents, or have teeth that flop out at the mere mention of the word apple), Jennifer realizes she only has one real regret: the relationships she’s lost.

Rather than running off to complete a frantic bucket list, Jennifer chooses to stay put and write a letter to the three most significant people in her life, to say the things she wished she’d said before but never dared: her overbearing, selfish sister, her jelly-spined, cheating ex-husband, and her charming, unreliable ex-boyfriend–and finally tell them the truth.

At first, Jennifer feels cleansed by her catharsis. Liberated, even. Her ex-boyfriend rushes to her side and she even starts to build bridges with her sister Isabelle (that is, once Isabelle’s confirmed that Jennifer’s condition isn’t genetic). But once you start telling the truth, it’s hard to stop. And as Jennifer soon discovers, the truth isn’t always as straightforward as it seems, and death has a way of surprising you (summary from Goodreads).

So the first line of the summary already makes this book sound depressing: There’s nothing like being told that in three months you’ll be dead to make you think about what you really want in life. But don’t let that fool you, this book tackles the taboo and difficult topic of death with classic British dark humor. To be honest, given that this is such a heavy topic, I was surprised that the terminal illness part wasn’t really the focus of the book but rather the character sharing her grievances.

This book inevitably makes the reader think about what they would do if they only had a few months to live. I know that I, like many readers, pondered this question throughout the novel and in all honesty, I have no idea what I would do but I appreciated that Jennifer was open and honest about how she was feeling toward the people in her life and I felt like her letters reflected honest feelings and thoughts from her character.

I think one of the hardest things for be about this book was that Jennifer at times was a doormat and I had a hard time relating to that aspect of her character, but the way she evolves was interesting and honest. I personally wouldn’t care about any of my ex’s if I had a terminal illness but to each their own. Some people still harbor complex feelings about former lovers and if that’s what Jennifer felt like she needed to do to resolve her feelings then to each their own.

I was surprised by how fulfilled I was once I finished this book. It was unexpected and welcome. While there were some things about this book that didn’t always work for me, in the end I enjoyed it and felt content once I was finished.