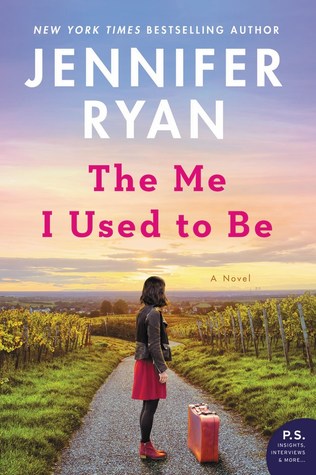 I was kind of lukewarm about this one when it came up for review, but I’ve heard such great things about Jennifer Ryan’s cowboy romances so I was interested to see if her romance talents transferred over to a different style of romance novel.

I haven’t read anything by her but I was open giving this book a try if nothing else beyond being curious about a new romance. I’ve had great luck with women’s fiction and romances lately so I felt like, why not?

Even if I was lukewarm about it initially, I thought the author sounded experienced and the book itself had a fun setting (Napa) so if nothing else I would get a well written book with a lot of wine!

She’s not the naïve girl she used to be…

After serving time for a crime she didn’t commit, Evangeline returns home to a cold welcome. Her mother blames her for her father’s death, and her brothers want her out of their way. When Evangeline learns she’s solely responsible for their failing ranch—putting her family’s future squarely on her shoulders—she’ll have to find a creative way to save their home before they lose it all.

She’ll have her reckoning…

Her only ally: the cop who sent her away. Chris Chambers is positive she went to prison to protect someone else. He strikes a deal: help him track down the real criminals in exchange for clearing her name. But the closer Evangeline and Chris get to exposing the truth—and to each other—the deeper Evangeline is drawn into a dangerous sting that could finally bring her justice…or put her dreams on hold permanently.

She’ll fight for the life she always wanted…

Everyone’s lives moved on while Evangeline’s stood still. Now she has a chance to rebuild her family ranch, her life, and expose the people who put her away, so she can become the woman she was always meant to be (summary from Goodreads)

I had no cause to be lukewarm with this one—I was sucked in and spent two days utterly engrossed in it. It wasn’t necessarily a perfect story and I don’t know that I would give it 5 stars, but I thought it was solid and easily held my interest.

It was unexpectedly good for me and I thought the romance was unique and the story itself had a lot of heart. I loved that the focus of this book was split between the romance and the mystery. It’s not often that an author can do both well, but in this book Ryan pleasantly surprised me and I commend her for her abilities. I think Ryan’s writing ability and experience really sell this book. She’s a proven writer who has written successful romances and I think that really shows in this one.

This book had some weighty and heavy content though with some physical abuses suffering during Evangeline’s time in prison so that was a little bit of a downer. There was also a lot of family drama, especially in the beginning that was deliciously addicting but then ended up kind of running out of steam for me. toward the end which was a bit disappointing especially when it started out so strong.

Overall though the book had a solid foundation and was a great way to pass a couple of days reading. I ended up giving it a 4 star rating easily!