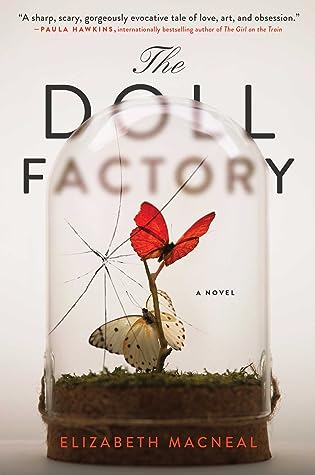 To say that I was exited to get this book in the mail is an absolute understatement. I actually squealed in excitement when I opened this book up!

The cover is magical and haunting and the summary sounded like something I was absolutely going to sink my teeth into immediately! Victorian England, creepy stalkers, and all sorts of disturbing gothic devices were promised in the summary.

I could hardly contain my excitement. I was ecstatic to read this one and cracked it open almost immediately and what awaited me in the pages was a dark and disturbing story in addition to creepy dolls.

In 1850s London, the Great Exhibition is being erected in Hyde Park and, among the crowd watching the dazzling spectacle, two people meet by happenstance. For Iris, an arrestingly attractive aspiring artist, it is a brief and forgettable moment but for Silas, a curiosity collector enchanted by all things strange and beautiful, the meeting marks a new beginning.

When Iris is asked to model for Pre-Raphaelite artist Louis Frost, she agrees on the condition that he will also teach her to paint. Suddenly, her world begins to expand beyond her wildest dreams—but she has no idea that evil is waiting in the shadows. Silas has only thought of one thing since that chance meeting, and his obsession is darkening by the day.

“A page-turning psychological thriller” (Essie Fox, author of The Somnambulist) that will haunt you long after you finish it, The Doll Factory is perfect for fans of The Alienist, Drood, and The Historian. (Summary from Goodreads)

This book was recommended to fans of The Alienist and Drood as well as The Historian. I loved The Alienist and didn’t care for Drood so based on that I was hoping that this book wouldn’t land in the middle. I thought this book might be a bit more historical fiction with a little romance in it, but this was definitely more of a historical psychological thriller with heavy gothic influence.

This book did have romance in it, but no in the classical way one thinks of historical romance. This romance was more obsessive and focused on the darker side of that obsession. Though darker in nature I enjoyed the way this story unfolded and it wasn’t the pleasant comfortable story one is used to reading. This book was surprising in lots of ways and it often made me uneasy in reading but I was hooked on Macneal’s prose and story. I couldn’t get enough of this one with it’s dark plot!

This is Macneal’s debut novel but I would never have guessed that reading this book. The story was sophisticated and interesting focusing on big themes like the role of women and the darker sides of London and its lower classes. Plus the dialogue was on point, it was which with atmosphere, and her historical research evident! The Victorian era is often remembered as glamorous and elegant, but books like this remind people that this era might have been that for the blue bloods but for the average person, life was definitely not glamorous.

The only thing that I thought was a little frustrating was that it was a bit of a slow burn rather than a quick page turner. This is a book that you are meant to savor rather than rush through. This book definitely needs to be on your radar for the fall. It’s a fabulous read and if you love creep historical fiction, you need this book on your self!