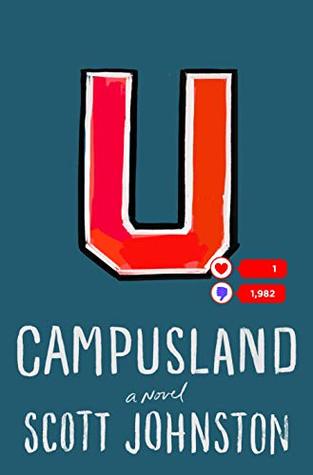 My sister works at Harvard as one of their librarians so any time I see a book about an ivy league college, I find myself drawn to it.

The summary of this book promised to include all the things that I find captivating about ivy league schools…..elitism and rich people problems. I couldn’t pass on this one because I was too drawn to the idea of it.

This is a book that I wouldn’t normally pick up in the store or really be drawn to if I’m being honest, but I liked the summary and the fact that this author is also a Yale alum. This is Scott Johnston’s first novel his having attended Yale, I think indicates he has first hand knowledge and even more authenticity to add to a book like this and made me eager to check it out.

A tumultuous and often hilarious first novel about one year of insanity at the Ivy-like Devon University, a blissful bubble of elite students and the adults at their mercy.

Eph Russell is an English professor up for tenure. He may look and sound privileged, but Eph is right out of gun-rack, Bible-thumping rural Alabama. His beloved Devon, though, has become a place of warring tribes, and there are landmines waiting for Eph that he is unequipped to see. The cultural rules are changing fast.

Lulu Harris is an entitled freshman—er, firstyear—from Manhattan. Her singular ambition is to be a prominent socialite – an “It Girl.” While most would kill for a place at Devon, to her college is a dreary impediment. She is pleasantly surprised to find some people she can tolerate in the Fellingham Society, a group of self-professed campus monarchists. When things become socially difficult, Lulu is forced to re-channel her ambition in a most unexpected way – as a militant feminist. In the process, she and Eph will find their fates at odds.

Also in the mix is Red Wheeler, who is in his seventh year at Devon, and is carefully managing his credits to stay longer. As the alpha dog atop Devon’s progressive hierarchy, Red is the most “woke” guy on campus. But when his position is threatened, he must take measures.

All paths collide in a riotous climax. Campusland is a timely and gleeful skewering of the modern American campus and its tribal culture (summary from Goodreads).

This book had a lot of humorous moments and I often found myself laughing out loud at some of the over the top satire in this one. When I picked this one up, I wasn’t entirely sure what I was going to get, but was pleasantly surprised by the humor I found in the pages of this one.

As expected, this author writes with authority on the subject of campus life and doesn’t shy away from tackling big hot button issues like racism, elitism, and even more serious things like sexual assault accusations. This book has a little something for everyone who likes taking a look at some of America’s most elite campus culture.

While this was a book that I would normally not pick up and read, I was glad that I did. There was a lot of issues addresses and often sharply examined with a satirical eye. Sometimes it read a little slow, but overall it was an easy read that gave a unique look at a fascinating subject.

I noticed that one reviewer felt this book captured serious campus issues but the writing makes this a hysterical novel and I completely agree. This book is funny—hilarious even in parts—but the subjects the book tackles are anything but funny. I think that’s what makes this book unique. You can read about and think about those serious issues but at the same time find escapism and humor in the writing.