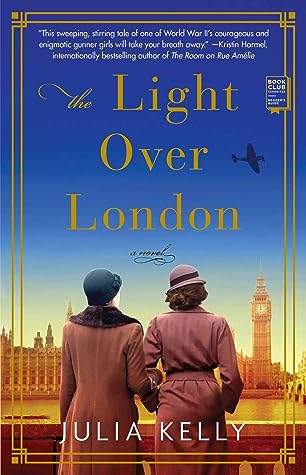 I have had this one on my radar since last year! I was so excited to be part of the paperback release and couldn’t wait to get my hands on this book when it finally arrived!

WWII adds so much drama and interest for me when it comes to novels—especially those set in London. From a historical standpoint, I prefer WWI but when it comes to war time romances, WWII is where it’s at for me.

Julia Kelly has written a number of historical romance novels and this appears to be a little different than her usual books but knowing that where was a romantic element in this story made me excited to read it especially knowing she was so successful with her historical romances.

For Cara Hargraves, burying herself in the past is easier than confronting the present, which is why working with a gruff but brilliant antiques dealer is the perfect salvation. While clearing out an estate, she pries open an old tin that holds the relics of a lost relationship; among the treasures, a World War II-era diary and a photograph of a young woman in uniform–the same one Cara’s grandmother wore during the war. Eager to find the author of the hauntingly beautiful, unfinished diary, Cara embarks on a journey to untangle the affair, and just maybe uncover her grandmother’s deeply guarded secrets, too.

In 1941, nineteen-year-old Louise Keene’s life had been decided for her–she’ll wait at home in her Cornish village until the wealthy son of her mother’s best friend returns from war to ask for her hand. But when Louise unexpectedly meets Flight Lieutenant Paul Bolton, a dashing RAF pilot stationed at a local base, everything changes. But their whirlwind romance is cut short when Paul’s unit is deployed.

Desperate for a larger life, Louise defies her parents and joins the women’s branch of the British Army in the anti-aircraft gun unit. As bombs fall on London, she relishes in her growing friendships with the gunner girls and knowing she and Paul will be together when the war is over. But when a bundle of her letters to Paul are returned unanswered, she learns that wartime romance can have a much darker side (summary from Goodreads).

If there’s one thing that will capture my attention in like two seconds it’s letters or diary entries. In a matter of pages this book hooked me with the discovery of a hidden diary. This is a duel story book and I was drawn into Louise’s story instantly. As a historian myself, I love the idea of discovering long lost antiques, diaries, letters—-all of it. So instantly I was hooked on this book.

I thought the blurb on the cover about being perfect for fans of The Lilac Girls or The Nightingale (neither of which I have read by the way), was a little misleading. This book was a lot more romance for me rather than historical women fiction. That’s not to say it diminished it at all, I just felt like this novel had a lot more in the way of romance which was exactly what I was looking for. I loved this one and thought the romance was well done and a bit of a slow burn. I stayed up way longer than I anticipated reading this book.

The plot might have been a little predictable for some but for me I rather enjoyed the familiarity of the plot and finished it feeling satisfied and happy with the ending even if it wasn’t as neat as I was expecting it to be, for me it worked.

It wasn’t ground breaking material but I adored it. I love the whole premise of the gunner girls and the romances that developed across two dueling plot timeline and I finished it feeling content and looking forward to more of Kelly’s historical fiction. It was a fun read and an enjoyable way for me to pass a few lazy afternoons day dreaming of my own RAF pilot!

One thought on “Review: The Light Over London by Julia Kelly”