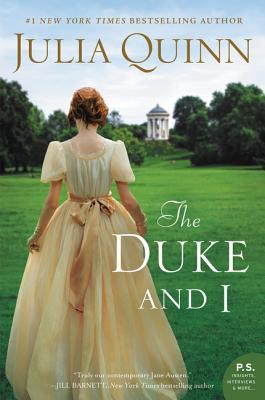 Do you ever have one of those days where you are just randomly searching Goodreads for ‘recommended’ reads and one just jumps out at you for no apparent reason?

Well that’s what happened with this book. I saw it and normally would have kept scrolling but I liked the cover and saw that it was soon to be a Netflix show and I wanted to read something romantic so why not I thought!

I had never read anything by Julia Quinn before but I have heard she is known for her snappy dialogue and charming romances so I downloaded the book and became instantly distracted by it and the characters.

By all accounts, Simon Basset is on the verge of proposing to his best friend’s sister, the lovely—and almost-on-the-shelf—Daphne Bridgerton. But the two of them know the truth—it’s all an elaborate plan to keep Simon free from marriage-minded society mothers. And as for Daphne, surely she will attract some worthy suitors now that it seems a duke has declared her desirable.

But as Daphne waltzes across ballroom after ballroom with Simon, it’s hard to remember that their courtship is a complete sham. Maybe it’s his devilish smile, certainly it’s the way his eyes seem to burn every time he looks at her… but somehow Daphne is falling for the dashing duke… for real! And now she must do the impossible and convince the handsome rogue that their clever little scheme deserves a slight alteration, and that nothing makes quite as much sense as falling in love. (summary from Goodreads).

For a basic romance novel, this book had a surprisingly good plot! I was expecting it to be flimsy and silly, but it had a lot of fun contained in each character and in the larger story. I fell in love with the Bridgerton family and their quirkiness. They were everything an eccentric, large family should be. I was roped in by all of their personalities as well as the romance that began between Daphne and Simon.

Simon was a sympathetic hero with an interesting backstory that made the reader just want to hug him. I adored him right up until they got married. When they got married and things got real, I started to lose interest in this one and then I started questioning what I actually did like about the book to begin with.

The Bridgerton brothers were over protective in the book and at first that was charming and fun, but as the book went on, it became excessive and annoying. But at least the author maintained it through until the end to remain true to their characters, though it did grate a little toward the end. Then there was Simon, who was so promising and good in the beginning but the whole not wanting to have children thing leading up to their marriage started to rankle too.

Once they were married it became intolerable and irritating. I just wanted to shake him. When he became angry with Daphne I was surprised by his temper and in fact a little bothered. It just seemed way to unnecessary and out of character for him.

By the end I had to take a few days to really think about what I planned on rating this one. On one hand I loved the romance and plot but it was the last third of the book that was just out of place for me. Up until then I had really enjoyed it and the chemistry between Daphne and Simon. I ultimately decided to rate it as a 3 star book. I would have gone with 4 stars but the way Simon behaved toward the end just turned me off to him. Will I read the other books in the series though…..yes! I think the family

12 thoughts on “Review: The Duke and I (Bridgertons #1) by Julia Quinn”