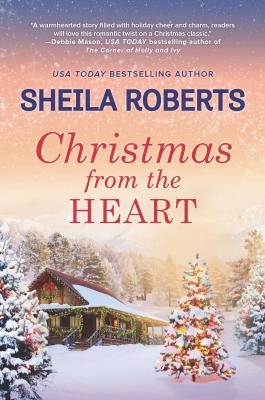 Sheila Roberts is another prolific writer with a huge fan base and a number of titles to her name. I have only read a couple of her books but found them to be enjoyable and light.

I wanted something relaxing after coming off of a few fast pace reads as well as something to get me into the holiday spirit….this book totally fit the bill.

I originally only did a special feature for this one as I wasn’t sure that I could fit it in to my review schedule, but I thought it sounded so fun that I decided to make some room and squeeze it in for the holidays.

Olivia Berg’s charity, Christmas from the Heart, has helped generations of families in need in Pine River, Washington, but this year might be the end of the road. Hightower Enterprises, one of their biggest donors since way back when Olivia’s grandmother ran the charity, has been taken over by Ebenezer Scrooge the Second, aka CFO Guy Hightower, and he’s declared there will be no more money coming to Christmas from the Heart.

With charitable donations dwindling, Olivia’s Christmas budget depends on Hightower’s contribution. She’s focused her whole life on helping this small town, even putting her love life on hold to support her mission.

When Guy’s Maserati breaks down at the edge of the Cascade foothills, he’s relieved to be rescued by a pretty young woman who drives him to the nearby town of Pine River. Until he realizes his rescuer is none other than Olivia Berg. What’s a Scrooge to do? Plug his nose and eat fruitcake and hope she doesn’t learn his true identity before he can get out of town. What could go wrong? (summary from Goodreads).

This is a book that really hit home for me. Mostly because it is set in the PacNW and that’s where I live. I don’t live in Washington (which is where this book is set) but I do live in Oregon at the base of the Cascades and Roberts captured the PacNW feel at winter time perfectly which was one of the reasons that I loved this book right away. You can tell that she really loves this area and described it beautifully. If I didn’t already live here, I would be looking for places to live in the PacNW!

I hoped to love the romance between Guy and Olivia. In this book, Guy is a little bit of a Scrooge and I thought it would make for a diverting romance that fit with the holiday season, but there was something just off putting about Olivia that I just didn’t care for when they were together. I found Olivia to be abrupt and she wasn’t always my favorite and I thought that Guy let things drag on way too long. Together they were an ok couple but I wasn’t entirely in love with them, but I liked them enough to keep reading and was rooting for them in the end.

While this was a book that I could easily have read in a sitting or two, I casually read it over a few days and never had trouble picking up where I left off and diving right back into it. There was lots of holiday magic and cheer in this one and I think that made up for the marginal romance.

I had a hard time deciding what to rate this book. I mean I loved the setting so much and the holiday feel shined in this book, but I also thought the characters were a little difficult and the romance suffered because of it. But at the same time I felt compelled to keep reading and see how things ended up between them. So I finally settled on a 3 star rating. It was a nice way to pass the evenings and got me in the mood for the holiday season but didn’t leave me swooning.