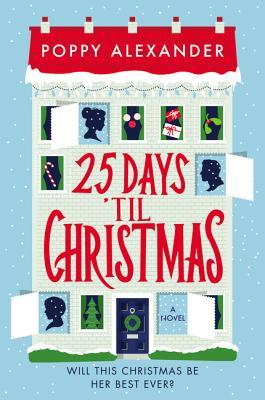 As we headed into the holiday season, this book was all over my social media and the adorable cover had my name all over it!

It sounded so great and I wanted to read it. I had it on hold at my library but at as December loomed closer, it became clear that I would likely not get this book until some time next spring.

One of my favorite IG bookstagramers, Saturday Nite Reader, happened to post a photo of this book and I comment on in and like a Christmas miracle, she gifted me this book! I was to thrilled and started it immediately when it arrived!

In this heartwarming, feel-good holiday novel, one woman needs to find a little inspiration in the 25 days leading up to Christmas to help her remember the magic of the season and the magic of falling in love—perfect for fans of Jenny Colgan and Josie Silver.

Kate Potter used to love Christmas. A few years ago, she would have been wrapping her presents in September and baking mince pies on Halloween, counting down the days and hours to Christmas. But that was before Kate’s husband left for the army and never came home. Now she can hardly stand December at all.

Kate can’t deny she’s lonely, yet she doesn’t think she’s ready for romance. She knows that her son, Jack, needs a Christmas to remember—just like Kate needs a miracle to help her finally move forward with her life. So she’s decided if there isn’t a miracle on its way, she’ll just have to make her own.

As Kate’s advent countdown to the best Christmas ever begins, she soon realizes that even with the best laid plans, you can’t plan for the unexpected. For when the path of the loneliest woman in town crosses with that of the loneliest man, these two destined hearts might find a way to save the holiday for both of them. (summary from Goodreads).

I don’t even know where to start with this one. It started off so promising and the premise for it was adorable and I thought there was going to be so much more romance. And as the summary implies, it was to be a heart warming tale. Well this one wasn’t exactly heart warming, more like heartbreaking! FYI this review contains mild spoilers.

I couldn’t decide which was more depressing…..the dead husband, the destitute single mom, the possibly special needs child, the dead sister, the attempted sexual assault, sexual harassment, suicide hotline stories, the special needs cafe, the school mom bullying/clicks, or the small businesses dying off one by one due to high rents. I mean there was a lot going on in this one and toward the end it took a pretty dark twist and I didn’t have enough time before the end to recover!  There was simply a lot to unpack here.

Throughout the book, I was hoping for way more romance to balance this one out but we only got a few hints of romance. I actually felt as though this book really didn’t need a romance because both of the main characters had so much emotional baggage that it would almost have been better if the book had focused on maybe just one of Kate’s issues and then flash forward to meeting this great guy. I don’t know I just felt like there was so much going on that the romance wasn’t really the focus and if there was going to be a romance, then there needed to be less stuff happening emotionally for each character.

There were also a few under explored plot lines that I think could have really added to the story but only if one was focused on. There was the friend from works potential romance, the Christmas Steps and the characters there, the wealthy businessman/client of Daniel’s, and the best friend was barely featured. I think the author could have picked one subplot and really worked it into the plot to add something rather than trying to incorporate everything. Plus there were a few plot points that were just left hanging and seemed unnecessary filler. For example, Kate was always talking about wanting a house with a garden for her son, and Daniel was talking about how his parents had a house with a garden…..but he lived on a house boat. So is Kate going to get this garden or was it just filler content? For me it was filler content. The financial situation was also confusing for the businesses. I don’t live in the UK and I gather that most of what the author was talking about might make more sense to a UK reader.

Basically this one was a disjointed mess for me—-but I kept reading. Why you ask? I mean, it was an easy read and at first I was hoping that it would get better as I went on and then when I realized it was getting darker, I had to see where it was going. In the end I thought there was a promising resolution but it didn’t save the overall story for me. There was a lot of Christmas but not enough cheer for me to justify giving this one anything more than 2 stars.

2 thoughts on “Review: 25 Days ‘Til Christmas by Poppy Alexander”