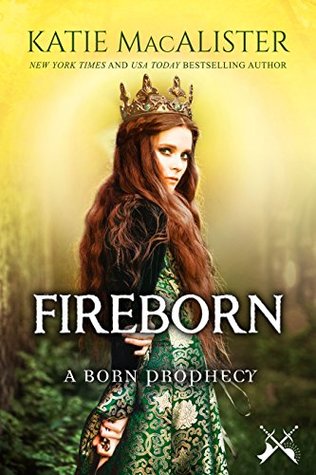 This author is a new to me author, but she has written a number of other series that are paranomal romances. I was approached about reading her new release in this series, Starborn, and I wasn’t sure that it would work as a standalone so I asked to read the first book in the series first which was this one, Fireborn.

Honestly I didn’t really know what to expect, I just knew that I liked the sound of Starborn and wanted to read it, but knew that in many fantasy books it’s difficult to jump around so I decided to start here.

At just under 300 pages, this one was relatively short for a fantasy novel and I figured I could hammer it out before the year was over. Plus I mean, look at that cover? It’s beautiful and I simply couldn’t pass it up!

What if a war was taking place under your nose?
Two ancient races locked in a battle for survival.
Which side would you take?

Allegria appears to all to be nothing more than a simple priestess devoted to worship of the sun goddess. Hallow is a masterless apprentice. Deo was meant to save the world and bring the Fireborn and Starborn together in peace.

But then invaders beseiged the land of the Starborn, breaking the prophecy. Now Allegria has fled the priesthood, and wields the power of the sun. Hallow accepts the mantle of leadership he so long avoided. And Deo is tormented and tortured by the power of the invaders, using chaos itself to create an army that will drive the interlopers from the land, and bring about the peace of the Fourth Age.

The three unlikely heroes must learn to trust where there is suspicion, to believe where there is only doubt, and to fight when all hope is lost. (summary from Goodreads)

This one read a little more like adventure than fantasy for me. It was definitely fantasy light, but that wasn’t all that surprising considering this one was under 300 pages. And honestly I thought it was fine that it was lighter on the fantasy spectrum, die hard fantasy fans might feel a little let down, but for me it was fine to have the fantasy world less front and center.

I think my biggest struggle with this book was the jarring POVs. There are three POVs in this book and while that’s completely fine, two are in the third person and one is in the first person. That was a little disorientating for me. It would have been less jarring if they all followed the same voice perspective. There was also a lot of jumping around in the timeline which also left me scratching my head at times. In the same vein as this, I needed more character development. There was so much potential in the characters but I felt they just meandered for me. Not necessarily in the story, but as I read them I just felt like they were going through the motions and flat rather than exciting and engaging.

So what kept me reading? I felt invested enough in Deo’s character to see what happened. I enjoyed Deo and am excited to see what lies in store in the next book. I also felt committed enough to the plot to see what happened in the end and ultimately I felt like the story wrapped up well and leaves us eager to see where book 2 takes us. That said, I am a little hesitant to read the next book because there were some mechanical issues that I struggled with in this one. In the end I went with a 3 star rating. It was ok, not great, but ok enough that I would read the next book.

Kindle Edition, 298 pages
Published May 3rd 2018 by Fat Cat Books (first published April 19th 2018)
ASIN B07C2NN5XC
Free review copy provided by publisher, in exchange for an honest review. All opinions are my own and in no way influenced.
Rating: 3 stars
Genre: fantasy