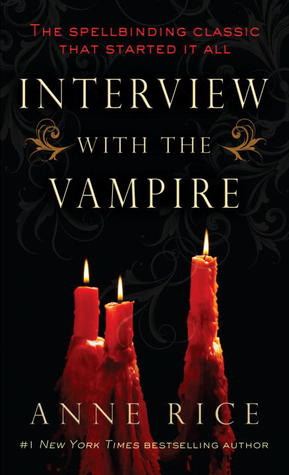 That was when I started this audiobook…..early Nov and here it is the first part of Jan and I am just now finishing it. Simon Vance was the narrator and he did a fabulous job with the narration, but I still had mixed feelings about the overall story.

This is the story of Louis, as told in his own words, of his journey through mortal and immortal life. Louis recounts how he became a vampire at the hands of the radiant and sinister Lestat and how he became indoctrinated, unwillingly, into the vampire way of life. His story ebbs and flows through the streets of New Orleans, defining crucial moments such as his discovery of the exquisite lost young child Claudia, wanting not to hurt but to comfort her with the last breaths of humanity he has inside. Yet, he makes Claudia a vampire, trapping her womanly passion, will, and intelligence inside the body of a small child. Louis and Claudia form a seemingly unbreakable alliance and even “settle down” for a while in the opulent French Quarter. Louis remembers Claudia’s struggle to understand herself and the hatred they both have for Lestat that sends them halfway across the world to seek others of their kind. Louis and Claudia are desperate to find somewhere they belong, to find others who understand, and someone who knows what and why they are.

Louis and Claudia travel Europe, eventually coming to Paris and the ragingly successful Theatre des Vampires–a theatre of vampires pretending to be mortals pretending to be vampires. Here they meet the magnetic and ethereal Armand, who brings them into a whole society of vampires. But Louis and Claudia find that finding others like themselves provides no easy answers and in fact presents dangers they scarcely imagined.

Originally begun as a short story, the book took off as Anne wrote it, spinning the tragic and triumphant life experiences of a soul. As well as the struggles of its characters, Interview captures the political and social changes of two continents. The novel also introduces Lestat, Anne’s most enduring character, a heady mixture of attraction and revulsion. The book, full of lush description, centers on the themes of immortality, change, loss, sexuality, and power. (Summary from Goodreads).

This one started out so promising. I liked the idea of Louis recounting his life prior to becoming a vampire and hie early years as a vampire, and as I said, Simon Vance’s narration was pitch perfect for this book…..but Louis quickly got on my nerves. Lestat was a colorful characters and saved most of this book for me, I want to read the next book which is about Lestat. This book served as an introduction to the vampire world but I was ready to leave Louis behind early on in favor of Lestat’s story.

Louis was a sympathetic character and obviously the intent was to explore his struggles and conflict with becoming a vampire, but good lord was he ever whiny. I just wanted him to either accept what he was or just walk out into the sun already and be done with it. I don’t recall Louis being that irritating in the film, but then again I haven’t seen it in years so maybe I need to revisit that situation.

I also couldn’t stand Claudia! I couldn’t quite get a read on her and Louis’s relationship…..were they meant to be lovers? Friends? Father/Daughter? Let’s just say its complicated and nebulous and I felt like that needed to be more clear. Louis was whiny, Claudia was vicious….both were less and less likable as the story went on. Lestat was the only character I wanted to know more about and felt remained interesting with loads of potential. Even Armand was more interesting than Louis. I was ready to be done with this one by the half way mark, but yet I finished it until the end…..WHY?

I have no idea why! I guess I felt that I needed to see it through until the end because I kept waiting for more Lestat? I don’t know but I finished it and even though I didn’t love this one, I am looking forward to the other books. I hope Louis doesn’t reappear, I’m over his character and look forward to learning more about Lestat in future books. I will say that I did enjoy all the Catholic references and influence in this one as I myself am Catholic. I also felt that the author’s contribution to the vampire lit genre is undeniable. She’s a brilliant writer and her story/lore is supurb, but Louis annoyed me so bad that I found it difficult to enjoy this one in the way that I hoped.

One thought on “Review: Interview with the Vampire (The Vampire Chronicles #1) by Anne Rice (Audible Edition)”