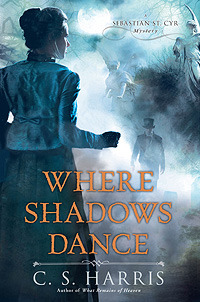 Another day, another Sebastian St Cyr mystery review. I and so deeply invested in this series right now that basically nothing is getting done around my house or any other reading for that matter.

So many people ask how I read so many books. Well the answer is simple, I speed read but I also read a lot of the books I have up for review right now, weeks or even months before. For example, I have already read 3 books for review in March and April so I am always ahead of schedule and I do this because I like to know I have time to binge read books or series like this one right here.

I read the first book in this series years ago and thought it was good, but it was the second book that has rekindled my interest in the larger series and I couldn’t be more excited about that.

How do you set about solving a murder no one can reveal has been committed?

That’s the challenge confronting C.S. Harris’s aristocratic soldier-turned-sleuth Sebastian St. Cyr when his friend, surgeon and “anatomist” Paul Gibson, illegally buys the cadaver of a young man from London’s infamous body snatchers. A rising star at the Foreign Office, Mr. Alexander Ross was reported to have died of a weak heart. But when Gibson discovers a stiletto wound at the base of Ross’s skull, he can turn only to Sebastian for help in catching the killer.

Described by all who knew him as an amiable young man, Ross at first seems an unlikely candidate for murder. But as Sebastian’s search takes him from the Queen’s drawing rooms in St. James’s Palace to the embassies of Russia, the United States, and the Turkish Empire, he plunges into a dangerous shadow land of diplomatic maneuvering and international intrigue, where truth is an elusive commodity and nothing is as it seems.

Meanwhile, Sebastian must confront the turmoil of his personal life. Hero Jarvis, daughter of his powerful nemesis Lord Jarvis, finally agrees to become his wife. But as their wedding approaches, Sebastian can’t escape the growing realization that not only Lord Jarvis but Hero herself knows far more about the events surrounding Ross’s death than they would have him believe.

Then a second body is found, badly decomposed but bearing the same fatal stiletto wound. And Sebastian must race to unmask a ruthless killer who is now threatening the life of his reluctant bride and their unborn child. (summary from Goodreads)

While I have read the later books in the series, I am often found wondering what happened from book 1 to book 12 that has altered the characters and their relationships so much? That’s precisely why I picked up this series to read from beginning to end, especially with another mystery due out this April.

This particular mystery wasn’t as engaging to me as some of the others, but I was so invested in the Hero and Sebastian romance that I couldn’t wait to when and how they started to trust one another. I loved Hero early on in the series because she just seems so no-nonsense and practical. I love her personality and fortitude even if she comes across as cold sometimes. When her and Sebastian interact, it’s evident to the reader, if not to the characters, that they are well suited to one another and even if they are fighting the feelings they have for one another, it’s clear they are well matched. I know that Sebastian loves his childhood sweet heart with a boy’s passion, but his love for Hero will in all likelihood be that of a man. In this book we get the first hints of the love that is to come and I couldn’t be more excited.

I have loved watching Sebastian come to terms with his own history. I mean much is still unresolved in this book still, but it’s been fun to see him mature and evolve throughout the series thus far. While the mystery might not have been as engaging for me it was still the focus of the novel and the series as a whole puts much emphasis on the mystery over anything else. I am looking forward to the next mystery and have checked out all the remaining books in the series from my library and I can’t wait to keep reading!