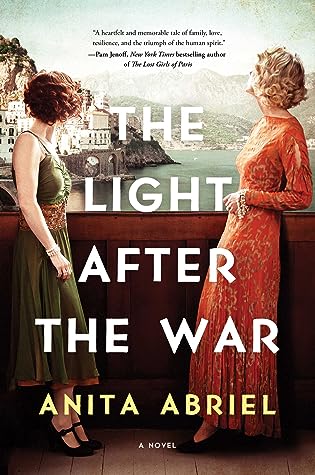 Post WWII era books have become rather popular lately and while I haven’t read too many of them, I thought it would be good to get a few under my belt.

I have read a lot of post WWI era books which I love, but I haven’t read too many post WWII era books and this one sounded like it would provide and interesting glimpse of life after the war and I thought I would enjoy seeing how these characters navigated the post war period.

I liked that the story was based on real events as the author’s mother was a Holocaust survivor so I thought this book would really add a personal touch and perspective that would make a great read!

It is 1946 when Vera Frankel and her best friend Edith Ban arrive in Naples. Refugees from Hungary, they managed to escape from a train headed for Auschwitz and spent the rest of the war hiding on an Austrian farm. Now, the two young women must start new lives abroad. Armed with a letter of recommendation from an American officer, Vera finds work at the United States embassy where she falls in love with Captain Anton Wight.

But as Vera and Edith grapple with the aftermath of the war, so too does Anton, and when he suddenly disappears, Vera is forced to change course. Their quest for a better life takes Vera and Edith from Naples to Ellis Island to Caracas as they start careers, reunite with old friends, and rebuild their lives after terrible loss.

Moving, evocative, and compelling, this timely tale of true friendship, love, and survival will stay with you long after you turn the final page. (summary from Goodreads)

I was actually surprised that I didn’t like this book more Don’t get me wrong, it wasn’t bad by any means but I think I was expecting a lot more from it because the story was based on the author’s own mother’s experiences in the war. After learning that bit of information, I think my expectations were really high and in a way I felt a little let down. This one wasn’t ‘bad’ as I said, but it just didn’t resonate with me in the way that I had hoped it would.

I think I was expecting something more historically dense. I mean there was some historical references but for me it read more like a romance, which is fine but I thought it would be more thick with historical details than it actually was. I thought the characters could have used more build up and depth as well. They weren’t boring necessarily, just more one dimensional for me. In a book with this content, I was hoping for more flushed up and developed characters as well as a stronger plot.

This one just landed in the middle of the road for me, good but not great. I liked it enough to keep reading and would probably pick up another one of the author’s books, but I wouldn’t move it to the top of the TBR, if that makes sense. I know that there were plenty of people out there who loved this one, but for me it just didn’t live up to all the potential and promise a story like this could have had. Bottom line, I was just hoping for more I think, but still it was an easy read that I got through in a couple of days.

2 thoughts on “Review: The Light After the War by Anita Abriel”