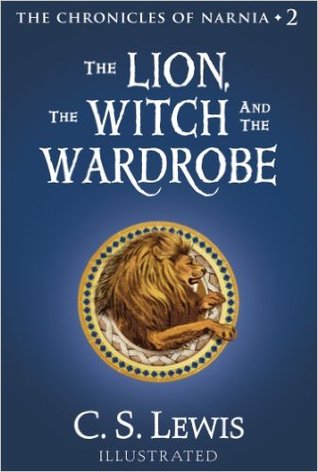 Even though I was a big reader as a child, this book just never made it on my to be read list. I wasn’t into fantasy as a kid and thus this book never appealed to me. I was way more into the American Girl books than Narnia and I even went to a Catholic school…..the Narnia books are practically required reading at Catholic schools!

But for whatever reason, I just by passed this entire series until now. As an adult I have absolutely fallen in love with fantasy and magical novels and now that I have a little boy, I can’t wait to share the Narnia books with him so I decided that I needed to give them a go before he was old enough to read them on his own (he is 3 so we have a while)

I know that I started the series a little out of order with this one technically being the second book in the series, but it was the one I was most familiar with so I decided to start there.

Narnia…the land beyond the wardrobe door, a secret place frozen in eternal winter, a magical country waiting to be set free.

Lucy is the first to find the secret of the wardrobe in the professor’s mysterious old house. At first her brothers and sister don’t believe her when she tells of her visit to the land of Narnia. But soon Edmund, then Peter and Susan step through the wardrobe themselves. In Narnia they find a country buried under the evil enchantment of the White Witch. When they meet the Lion Aslan, they realize they’ve been called to a great adventure and bravely join the battle to free Narnia from the Witch’s sinister spell.

This was the first book written in The Chronicles of Narnia. It now stands as the second book in the series, preceded by The Magician’s Nephew. (summary from Goodreads)

At just over four listening hours, this book was a quick listen and the narrator was fantastic. I loved Michael York’s narration so much and was sad that he didn’t narrate the others. I have seen the most recent Narnia film and was pleased to see that this book basically followed the film. I can see why so many children love this series.

There are magical creatures, enchanted forests, adventure and applicable life lessons. I adored listening to this one and even though it was definitely on the childish side, it was still fun to escape to Narnia and tap into my inner child.

I think the sibling I could identify with the most was probably Edmund even if I wanted to be more like Susan. I think a lot of us identify with Edmund because he is flawed and probably the most ‘human’ of the siblings. He is lured away from his family by the promise of glory only to learn the foolishness of his choice. I think he has the most interesting character arc at this point in the series.

Reading the Narnia books as an adult is so fun, even if the writing is a little basic and the plot full of holes (I often found myself wondering about things like where are the parents and what about this wardrobe why is it in this house etc) it was a pleasant and easy read that I now consider an absolute must read for my son as well as other children. I can’t wait to venture into Narnia again!