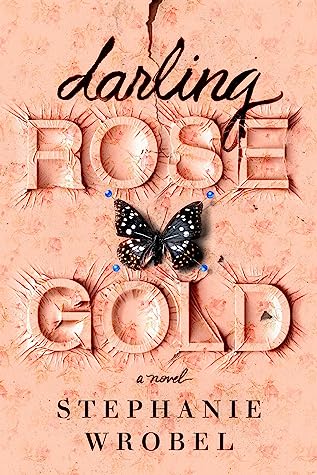 This novel has been getting a lot of hype on social media. It’s Stephanie Wrobel’s debut novel and it sounds dark and addicting. Which is exactly why I wanted to review it.

I mean, I am not going to lie, the main character’s name was Rose Gold and that was made clear in the summary and all I could think of was ‘gag me!’

I honestly wasn’t sure I could get past the name situation but I was eager to read this one all the same because it had all the complicated mother/daughter issues mixed with some psychologically thrilling elements so I was willing ot at least try and look past the name ‘Rose Gold’.

For the first eighteen years of her life, Rose Gold Watts believed she was seriously ill. She was allergic to everything, used a wheelchair, and practically lived at the hospital. Neighbors did all they could, holding fundraisers and offering shoulders to cry on, but no matter how many doctors, tests, or surgeries, no one could figure out what was wrong with Rose Gold.

Turns out her mom, Patty Watts, was just a really good liar.

After serving five years in prison, Patty gets out with nowhere to go and begs her daughter to take her in. The entire community is shocked when Rose Gold says yes.

Patty insists all she wants is to reconcile their differences. She says she’s forgiven Rose Gold for turning her in and testifying against her. But Rose Gold knows her mother. Patty Watts always settles a score.

Unfortunately for Patty, Rose Gold is no longer her weak little darling…

And she’s waited such a long time for her mother to come home. (summary from Goodreads)

Right off the bat let me put this out there, this book is disturbing. If you want a thriller that’s more complex and dark, this is that thriller. I mean, I didn’t really like any of the characters….like not even a little bit but that added to the overall feel of instability and disturbing terror. I felt uneasy and on edge all at the same time. The characters are very very very f-ed up and have lots of issues so if you like your thrillers with less damaged characters this might not be the book for you but I did enjoy the level of crazy the author went to for these two characters.

This book was compelling and I found myself excited to read it even if the subject matter was darker and more serious, I still had a hard time putting it down. But I will say that about 3/4 of the way through we start wrapping things up leaving the rest of the book as mostly fluff filler which was a little disappointing. I mean it wasn’t bad but I just hoped that the ending would have come a little later or maybe been developed a little more rather than adding filler at the end, if that makes sense.

Overall I really liked the premise of this story and it is a true blue psychological thriller, there is no disputing that. Fans of psychological thriller will definitely want this one on their radar. For a debut novel this one is a solid read and I am looking forward to more by this author. Though I will say that I hoped for more of a solid ending, especially considering how strong this one started out. In the end, I went with 4 stars. A great debut!

Paperback, 320 pages
Expected publication: March 17th 2020 by Simon & Schuster
ISBN13 9781982135041
Free review copy provided by publisher, Simon and Schuster, in exchange for an honest review. All opinions are my own and in no way influenced.
Rating: 4 stars
Genre: psychological thriller