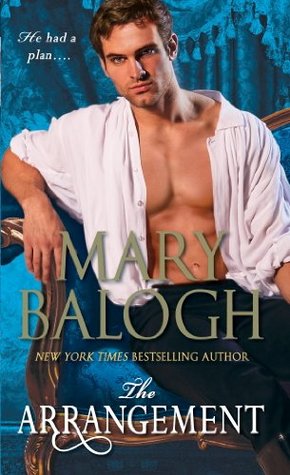 As many of you might recall, my mom set me the first book in this series for Valentines Day with the PSA to skip all the sex parts.

Which was entirely unnecessary as the sex was shockingly tame in the first book, though I can’t say that I loved Hugo very much. So when I finished that one, I was not at all surprised when the second book in the series showed up thanks to my mother.

Again, when I opened the box and saw this cover, I had to laugh once more. It screams cliche tacky romance novel. I love romances so much though (tacky cover or not!) and all the reviews I saw for this one said this was their favorite in the series, so I was eager to start it!

A mesmerizing story of passionate awakening and redemption, Mary Balogh’s new novel unites a war hero consigned to darkness with a remarkable woman who finds her own salvation by showing him the light of love.

Desperate to escape his mother’s matchmaking, Vincent Hunt, Lord Darleigh, flees with his valet. Blinded by a cannon blast on the Napoleonic battlefields, Vincent needs time alone to heal and reflect, away from the well-meaning meddling of his family and those who run his vast estate. But anonymity proves impossible even in the rustic reaches of a country inn, and soon another marital trap is sprung. Luckily, he is saved in time by a stranger with a captivating voice that stirs something deep inside. And when Miss Sophia Fry’s intervention on his behalf finds her unceremoniously booted from her guardian’s home, Vincent is compelled to act. He may be blind but he can see a solution to both their problems: marriage. Yet he never imagined a wedding of convenience would open his heart to a love he never expected.

Quiet, unassuming Sophia may be invisible to nearly everyone, but even a woman unflatteringly called “mouse” isn’t going to stay silent when an unsuspecting gentleman is about to be trapped into marriage. At first, she rejects Vincent’s proposal. But when such a gloriously handsome and heartbreakingly vulnerable man persuades her that he needs a wife of his own choosing as much as she needs protection from destitution, she agrees. Her alternative is too dreadful to contemplate.

I must say that I agree with all the reviews that I was reading about this one—I liked Vincent’s story much better than Hugo’s. This story was much sweeter and less ‘lusty’ than Hugo’s story and the whole ‘Survivor’s Club’ component is much less the focus in this one. As a heroine, I found Sophia a little wanting. She was so timid and unsure of herself and even as the story went on I found it hard to believe that she was going to grow or evolve at all or at least to the level of formidable Viscountess but she does a decent job but I was hoping for more.

As for the hero, I found Vincent charming, likable, and sexy. Balogh does a great job at helping the reader to see past the challenges of her damaged heroes and make them dashing and solid romantic figures. I will say though the one I am most interested in reading is Flavian’s story if for no other reason than I have laughed every single time I have read his name in both books thus far.

I have to admit again that the sex in this book is tame so if you are worried about the level of steam in this one, it’s mostly a simmer rather than a boil. There were many times where I chuckled at Sophia’s wit and Vincent’s charming responses, I thought together they had a lot of chemistry and I loved watching their love story unfold. It might not have been terribly romantic in the beginning but by the end, I found myself so happy and satisfied for the both of them. It read very much like a Cinderella story and I absolutely adored it. I am looking forward to the next book, and you better believe that the third book showed up on my door step courtesy of my mother just today! I think it’s safe to say that this series is a favorite of hers!

One thought on “Review: The Arrangement (The Survivors’ Club #2) by Mary Balogh”