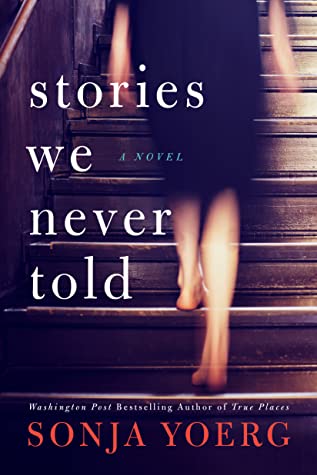 Sonja Yoerg is another author that I have been a long time fan of, though I have to admit I was a little worried about this one. Yoerg usually writes more women’s fiction, but this one was marketed as more of a thriller.

But I did keep an open mind. I hate how some authors get pigeon holed into writing a certain genre, just because an author is known for writing women’s fiction doesn’t mean she can’t write anything else right?

While Yoerg might be known for a certain genre, I would argue that she should be known for her ability to write complex characters that truly stand out rather than a particular genre—so I took the plunge and started reading this one.

Psychology professor Jackie Strelitz thought she was over her ex-lover and colleague, Harlan Crispin. Why should she care if Harlan springs a new “friend” on her? After all, Jackie has everything she ever wanted: a loving husband and a thriving career. Still, she can’t help but be curious about Harlan’s latest.

Nasira Amari is graceful, smart, and young. Worse, she’s the new member of Jackie’s research team. For five years, Harlan enforced rules limiting his relationship with Jackie. With Nasira he’s breaking every single one. Why her?

Fixated by the couple, Jackie’s curiosity becomes obsession. But she soon learns that nothing is quite what it seems, and that to her surprise—and peril—she may not be the only one who can’t let go. (summary from Goodreads)

This book has four different POVs so there were a few characters to keep track of, but on the whole it was a fun changeup that kept me engaged and focused on the story. I had to keep my brain engaged and I was absolutely ok with that. This is a novel that really focuses more on characters and how often they aren’t what they seem. For me this one read more like a domestic suspense rather than a psychological thriller or general thriller. If you are a fan of domestic suspense then you will enjoy this one for sure.

While this book landed more in the domestic suspense category for me, there was still plenty to keep me on the edge of my seat and twists that provided chilling shivers. I would say this is an unconventional thriller—maybe that’s the best way to put it. It’s a smart, layered read that I easily found myself looking forward to picking up each night before bed, but then instantly regretting because it was hard for me to put down!

I really enjoyed getting to know these characters through the alternating POVs. I mean I may not have liked all of them but I found that I was eager to know more and see their perspective of the story and events. I was often left to wonder what was real and what wasn’t, what was perception by the character and what was reality. I love books that make readers question what they are reading as ‘truth’. It’s an interesting literary tool and was deployed well here. A great character driven read with lots to discuss and to leave the reader to decide for for themselves.

Once again Yoerg has produced a well crafted read that is different that what I have come to expect from her but I am excited to see more books like this from her because it was a treat to read!

Kindle Edition, 328 pages
Expected publication: May 1st 2020 by Lake Union
ASIN B07WCP61XL
Free review copy provided by publisher, Lake Union in partnership with the Tall Poppy Writers/Bloggers, in exchange for an honest review. All opinions are my own an in no way influenced.
Rating: 4 stars
Genre: domestic suspense, thriller