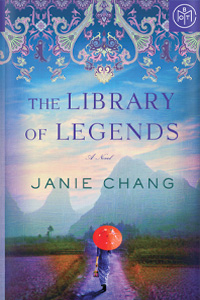 This book was on my radar well before it was a Book of the Month pick for April. In fact I have been looking forward to reading this book for months! This cover is absolutely stunning and this book sounded like a new and exciting piece of a little known time in history.

I haven’t read a lot of Asian historical fiction beyond some of the more well known titles like Memoirs of Geisha and Snow Flower and the Secret Fan. Memoirs of a Geisha was one of my favorite reads when I read it years ago and for a while I bought a ton of historical fiction set in Asia after I read that book but just never got around to reading many of those books.

European historical fiction is inundated with novels all of which are always trying to distinguish themselves as something new, but often they are all very similar which is why this book sounded like the exact opposite. I was eager to dive in and see if I loved it or not.

China, 1937. When Japanese bombs begin falling on the city of Nanking, nineteen-year-old Hu Lian and her classmates at Minghua University are ordered to flee. Lian and a convoy of students, faculty and staff must walk 1,000 miles to the safety of China’s western provinces, a journey marred by the constant threat of aerial attack. And it is not just the refugees who are at risk; Lian and her classmates have been entrusted with a priceless treasure: a 500-year-old collection of myths and folklore known as the Library of Legends.

The students’ common duty to safeguard the Library of Legends creates unexpected bonds. Lian becomes friends and forms a cautious romance with the handsome and wealthy Liu Shaoming. But after one classmate is arrested and another one is murdered, Lian realizes she must escape before a family secret puts her in danger too. Accompanied by Shao and his enigmatic maidservant, Sparrow, Lian makes her way to Shanghai in the hopes of reuniting with her mother.

During the journey, Lian learns of the connection between her two companions and a tale from the Library of Legends, The Willow Star and the Prince. This revelation comes with profound consequences, for as the ancient books travel across China, they awaken immortals and guardian spirits who embark on an exodus of their own, one that will change the country’s fate forever. (Summary from Goodreads)

As I have mentioned, I don’t know a whole lot about Asian history not to mention WWII between the Chinese and Japanese so right away I was sucked into the historical aspects of this book. There was a lot of folklore in this one too which was surprising even if it was mentioned in the summary, I was so distracted by the historical pieces that I forgot all about the folklore parts mentioned in the summary. When the folklore started emerging in this one, I was extremely intrigued and wanted to know so much more.

I was very interested in the story of the students traveling across country dodging air raids and danger along the way. The history alone was new and refreshing for me. The characters themselves were interesting and brought unique backstories to the narrative. It was a book that I was certainly not bored with and felt like I learned a lot about a previously unknown time.

While the historical and folklore pieces were new and interesting, I wasn’t as fully engaged in the actual folklore story as I had hoped. I would have liked to have seen the folklore pieces make a larger impact on the main storyline. Don’t get me wrong this was still a great read and I definitely felt like it was something new and different, but I was hoping for more. The folklore and history are so rich and I would have liked to have seem the author use that folklore richness a bit more in this one.

I haven’t read any of this author’s other books, other reviewers love her first novel the best and I definitely need to pick that one up so I can compare them. In the end I thought this was a new and exciting read for me and I definitely would recommend it to historical fiction fans who are looking for something different than the traditional European narratives.

Hardcover, Book of the Month, 366 pages
Published April 1st 2020 by William Morrow
ISBN13 9781643856056
Free review copy provided by publisher, William Morrow in partnership with Tall Poppy Writers/Bloggers, in exchange for an honest review. All opinions are my own and in no way influenced.
Rating: 4 stars
Genre: historical fiction, Asian fiction

One thought on “Review: The Library of Legends by Janie Chang”