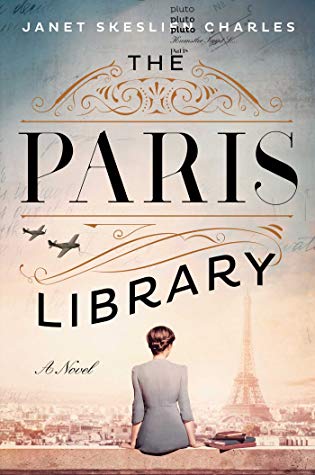 When I saw this book come across my desk for review, I knew it was going to be an easy yes. The cover is elegant and inviting, not to mention the title promised a literary lovers dream setting.

I couldn’t wait to dive in and get caught up in the romanticism of Paris and a book that was sure to be an ode to book lovers everywhere.

Now that I think back, I don’t even think I read the summary of the book before saying yes—that was how sure I was that I wanted to read this book. One look and I knew. I should also add that my sister worked at the American Library in Paris and my mom and I went to visit her while she was there and it was an incredible place, so I knew this book was going to be something special.

Paris, 1939. Odile Souchet is obsessed with books and the Dewey Decimal System, which makes order out of chaos. She soon has it all – a handsome police officer beau, an English best friend, a beloved twin, and a job at the American Library in Paris, a thriving community of students, writers, diplomats, and book lovers. Yet when war is declared, there’s also a war on words.

Montana, 1983. Widowed and alone, Odile suffers the solitary confinement of small-town life. Though most adults are cowed by her, the neighbor girl will not let her be. Lily, a lonely teenager yearning to break free of Froid is obsessed by the older French woman who lives next door and wants to know her secrets.

As the two become friends, Odile sees herself in Lily – the same love of language, the same longings, the same lethal jealousy. The Paris Library’s dual narratives explore the relationships that make us who we are – family and friends, first loves and favorite authors – in the fairy tale setting of the City of Light. It also explores the geography of resentment, the consequences of unspeakable betrayal, and what happens when the people we count on for understanding and protection fail us.

The wit, empathy, and deep research that brings The Paris Library to life also brings to light a cast of lively historical characters and a little-known chapter of World War II history: the story of the American librarian, Miss Reeder, who created the Soldiers’ Service to deliver books to servicemen, and who later faced the Nazi ‘Book Protector’ in order to keep her library open. She and her colleagues defied the Bibliotheksschutz by delivering books to Jewish readers after they were forbidden from entering the library. (summary from Goodreads)

One of the things that really worked for me in this one was the duel storylines. I love this approach in historical fiction because I think it keeps the reader moving along in the story, especially when the storylines are balanced. I really enjoyed both storylines, but I did think that the historical one was a little stronger which was fine by me because this is after all a historical fiction book.

The other thing that stood out for me in this book was the sense of something different. As many of you know, WWII historical fiction is a saturated setting and sometimes it’s difficult to find something ‘new’ in a sea of similar stories but this book manages to bring about a new and untold story. I loved how the author explored the role that the American Library played in the occupation of Paris. I had never really thought about how the occupation effected institutes like that so it was an interesting way to explore some parts of that time in history that I was less familiar with.

While I liked Odile, she was flawed which on one hand made her very real and relatable, but on the other hand, there were times in the book where I didn’t agree with her. But in the end I decided that the things I didn’t agree with made her more interesting for me, ultimately I liked her but I didn’t love her and that was ok because her story was strong and I felt satisfied with how things ended.

If you are a historical fiction lover then this book needs to be on your radar for summer reading. It was a unique story full of quirky library goodness and I loved relearning the Dewey Decimal system. I also think this would be a good book for book clubs as there is lots of things to discuss and could lead to a compelling discussion.

One thought on “Review: The Paris Library by Janet Skeslien Charles”