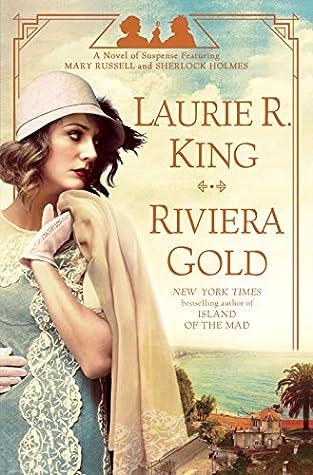 I absolutely adore the Russell and Holmes books! Sadly I have only read a couple of them but this is a series that I knew I would love the second I cracked open the first book a few years ago.

But as you can see this is a very long standing series and while I only read a couple of the books in the series, it’s a series that I know I would pick up again when I needed something guaranteed to be enjoyable.

When I was approached to read this book I debated about passing, simply because I knew there were a number of books I would need to read to get caught up on the series, but I also really loved the sound of this mystery and I ultimately caved and couldn’t wait to get reacquainted with some of my favorite characters.

It’s summertime on the Riviera, where the Jazz Age is busily reinventing the holiday delights of warm days on golden sand and cool nights on terraces and dance floors. Just up the coast lies a more traditional pleasure ground: Monte Carlo, where fortunes are won, lost, stolen, and hidden away.

So when Mary Russell and Sherlock Holmes happen across the Côte d’Azur in this summer of 1925, they find themselves pulled between the young and the old, hot sun and cool jazz, new friendships and old loyalties, childlike pleasures and very grownup sins (summary from Goodreads)

Ok so to be fair, I have only read the first two books in this series and while I loved them—it is clear that I have missed a lot from book two to this one (book sixteen). It’s not to say this book wasn’t good, but I just want to point out that I did feel like I missed a substantial part of the larger narrative. But at the end of that day that was ok by me because the mystery is what’s front and center in this book.

With seasoned mystery writers who have long standing series such as this, the authors usually do a great job at keeping the focus on the mystery so while I felt like I was missing back stories and plots, it wasn’t the central story of the book and the author did a great job keeping new readers up to speed with the lives and history of Mary and Holmes. I enjoyed the mystery so much and found myself falling in love with the series all over again and am eager to go back and read some of the other books in the series now!

As expected, the author did a wonderful job describing the south of France in glorious details, I could practically feel the sun on my face. The only thing that surprised me about this book was that the Holmes parts didn’t really make an appearance in the book until much later and in my limited experience with this series, I always felt that Mary and Holmes were much better together  as their whit played off each other so well and in this book the first half was mostly just Mary. Mary is a strong character thought who is fully developed but I just enjoy the banter between her and Holmes so much that I missed that a little in this one.

Overall though this was an excellent installment to a longstanding fan favorite series! The cover is beautiful, the writing and mystery well done and engaging, and of course two beloved characters! I can’t wait to jump back into this series. This year I have really been making an effort to give into historical mystery series that I love but haven’t finished and this one is moving to the top of my list!

Kindle Edition, 320 pages
Published June 9th 2020 by Bantam
ASIN B07XXDRMS2
Free review copy provided by publisher, Bantam, in exchange for an honest review. All opinions are my own and in no way influenced.
Rating: 4 stars
Genre: historical mystery