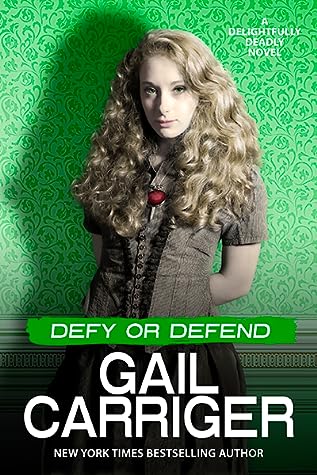 If there is one author that I have always had good luck reading—-it’s Gail Carriger. I discovered her Parasol Protectorate series years ago and fell head over heels in love with it.

Since then I have read may of her other spin off novels and series most set in the same world as the Parasol Protectorate series. I adore her spunky and sassy characters that make up her world but I also love that many of her characters are LGBTQ, while others are not.

She isn’t afraid to write bold characters and doesn’t conform to traditional gender roles in her novels which I love. I also know that whenever I pick up one of her books, I am always going to be in for a treat!

A vampire hive descending into madness. A beautiful spy with a sparkly plan. The bodyguard who must keep them from killing each other.

Dimity Plumleigh-Teignmott, code name Honey Bee, is the War Office’s best and most decorative fixer. She’s sweet and chipper, but oddly stealthy, and surprisingly effective given the right incentives.

Sir Crispin Bontwee was knighted for his military service, but instead of retiring, he secretly went to work for the War Office. Mostly he enjoys his job, except when he must safeguard the Honey Bee.

Neither one is a vampire expert, but when the Nottingham Hive goes badly Goth, only Dimity can stop their darkness from turning bloody. And only Crispin can stop an enthusiastic Dimity from death by vampire.

In a battle for survival (and wallpaper), Dimity must learn that not all that sparkles is good, while Cris discovers he likes honey a lot more than he thought. (summary from Goodreads)

Carriger’s greatest asset is her humor. This book is the perfect blend of rom-com and the supernatural. It had something for everyone to love whether you are a fan of historical fiction, romance, the supernatural or steampunk. There are a lot of fun elements to this book as well as the series and world overall.

This particular book had a lot more steam that I anticipated and it wasn’t from the steampunk in this book—it was from the main characters themselves, Dimity and Crispin. It was clear they had a mutual attraction and I loved watching them come together. It had heat and believability but then you add in the humor and you have such a delightful romance that it was so hard to put down.

Fans of the Parasol Protectorate world, especially the Finishing School series, will be familiar with many of the characters and dynamics of the story but if you haven’t read any of the other books set in this world have no fear! This book could easily be read as a standalone, the author does a nice job orientating readers in the world and with the characters. Naturally you will get more out of the book if you are familiar with the world and the characters from previous books, but it’s not a requirement and you will easily fall in love with the characters without having to go back and read the whole series etc.

Carriger’s books are always well written, funny, and a wonderful escape. They are truly the kind of books I can jump into and get lost for a few hours. I am always sad to put a bookmark in because I don’t want to leave the characters or the world. This is just what I needed to read right now during this unsure time. Romance, humor, and vampires—you just can’t go wrong with that combo!

Kindle Edition, 240 pages
Published May 3rd 2020 by GAIL CARRIGER LLC
ASIN B0856ZF5YH
Free review copy provided by author in exchange for an honest review. All opinions are my own and in no way influenced.
Rating: 5 stars
Genre: steampunk, romance, historical fiction, vampire lit

One thought on “Review: Defy or Defend (Delightfully Deadly #2) by Gail Carriger”