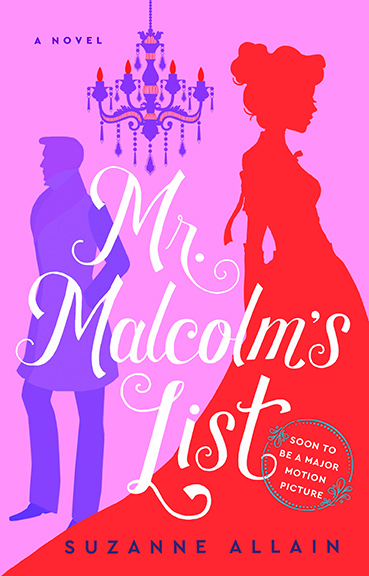 When I saw this one on Netgalley, I thought it was eye catching and sounded interesting so I downloaded it. Then I got the pitch for it a couple of weeks later and suddenly I moved it up on my review timeline.

I had already planned to review this one in July but wasn’t planning on reading it until a little closer to the release day, but then all the news started breaking about the upcoming film and I moved this baby right on up!

This upcoming film is going to feature Constance Wu and Sam Heughan along with a number of other diverse cast members and will be releasing in the spring of 2021. Needless to say I was chomping at the bit for this one!

It is a truth universally acknowledged that an arrogant bachelor insistent on a wife who meets the strictest of requirements–deserves his comeuppance.

The Honorable Jeremy Malcolm is searching for a wife, but not just any wife. He’s determined to elude the fortune hunters and find a near-perfect woman, one who will meet the qualifications on his well-crafted list. But after years of searching, he’s beginning to despair of finding this paragon. And then Selina Dalton arrives in town…

Selina, a vicar’s daughter of limited means and a stranger to high society, is thrilled when her friend Julia invites her to London.  Until she learns it’s part of a plot to exact revenge on Mr. Malcolm. Selina is reluctant to participate in Julia’s scheme, especially after meeting the irresistible Mr. Malcolm, who seems very different from the arrogant scoundrel of Julia’s description.

But when Mr. Malcolm begins judging Selina against his unattainable standards, Selina decides that she has qualifications of her own. And if he is to meet them he must reveal the real man behind…Mr. Malcolm’s List. (summary from Goodreads)

This is one of those books where I hope the movie is better. The story sounded like it was going to be really strong and a more modernized period piece for a younger audience and by younger I don’t mean teens but the mid 20’s to 30’s demographic. Something new, fresh, and sexy. I was so excited for this one but as I started reading a lot of things just didn’t work for me.

I think what it all boiled down to was the length of the book. This could have been a great novel but it comes in at around 250 pages which was not enough to develop the kind of smart and sexy story that this could have been. For example, I was very confused by Julia’s motives for luring Mr Malcolm into a trick of sorts, with her friend Selina. It seemed flimsy and the plot to lure Malcolm came across as grandiose compared to the ‘slight’ Julia felt like she received. Now that said, had there been more of a build up to Julia and Malcolm’s opera outing and a clear slight then I think this could have really worked as a catalyst to the larger story.

While the book might not have worked for me, I have high hopes for the film. I am excited to see something new and diverse with some big names like Constance Wu and Sam Heughan. Constance Wu does comedy role so well and I think this could be a film that she could shine in. I will definitely be watching this film when it comes out and I will be sure to review it as well and circle back on this review and see how it compared, so be watching for that. But for now, I wasn’t sure that this book worked for me and that just makes me so sad because I had really high hopes for this one.

One thought on “Review: Mr. Malcolm’s List by Suzanne Allain”