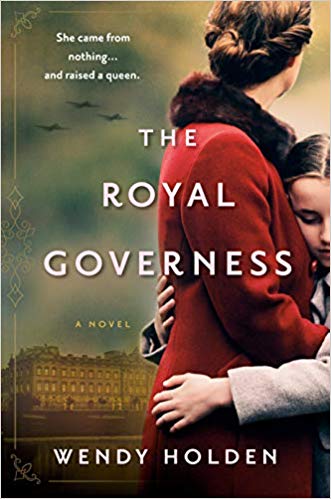 This book popped up on my radar in the early summer and I have been looking forward to it ever since. Like many, I love all things royal and Queen Elizabeth has been such a mysterious figure for me. I can’t imagine what it must have been like for her growing up not expecting to be queen only to have the position basically thrust upon her.

Which is why this book sounded so interesting. I liked the idea of getting a glimpse into the younger years of Queen Elizabeth, even if it was a fictionalized account of her younger years.

This book focuses on Elizabeth’s governess, Marion Crawford, who served the crown until Elizabeth married Prince Philip and I was eager to dive in to satisfy my curiosity.

Sunday Times bestselling author Wendy Holden brings to life the unknown childhood years of one of the world’s most iconic figures, Queen Elizabeth II, and reveals the little-known governess who made Britain’s queen into the monarch we know today.

In 1933, twenty-two-year-old Marion Crawford accepts the role of a lifetime, tutoring their Royal Highnesses Elizabeth and Margaret Rose. Her one stipulation to their parents the Duke and Duchess of York is that she bring some doses of normalcy into the sheltered and privileged lives of the two young princesses.

At Buckingham Palace, Windsor Castle, and Balmoral, Marion defies oppressive court protocol to take the girls on tube trains, swimming at public baths, and on joyful Christmas shopping trips at Woolworth’s. From her ringside seat at the heart of the British monarchy she witnesses the upheaval of the Abdication and the glamour and drama of the 1937 Coronation.

During the war, as Hitler’s Heinkels fly over Windsor, she shelters her charges in the castle dungeons (not far from where the Crown Jewels are hidden in a biscuit tin). Afterwards, she is there when Elizabeth first sets eyes on Philip. But being beloved governess and confidante to the Windsor family has come at a cost. She puts her private life on hold until released from royal service following Princess Elizabeth’s marriage in 1947.

In a majestic story of love, sacrifice, and allegiance, bestselling novelist Holden shines a captivating light into the years before Queen Elizabeth II took the throne, as immortalized on the popular television series The Crown. (summary from Goodreads)

Even though I went into this one knowing it was a fictionalization of real people and events, I love books that are based on real people and events even if some of the facts are manipulated to suit the story. I truly felt as though the characters had authenticity and were realistic. I didn’t feel as though the author’s liberties with the characters or story were ever misleading or unbelievable. I thought that the author did a nice job staying true to the real life figures while still managing to write an enjoyable story.

Seeing major historical events through the lens of Marion was great! Marion’s character was very forward thinking and intelligent which made seeing these various historical events though her perspective, feel different. Not different bad, but different in that her reaction and perspective of these events just felt new in a way. It’s hard for me to articulate exactly how it was different—I just felt that it was. Maybe it was because Marion more of a modern woman and her perspective felt more like that of a modern woman? Either way I fully enjoyed reading about history with a Marion twist! I also spent a lot of time researching different events and people which I thought was a diverting aspect of the novel but yet fun all the same.

The only thing that I struggled with this book though was the ending. It was a great read and I think that Marion’s story was wonderful as was her character, but I also struggled with the fact that it wasn’t a traditional ending. By traditional ending I mean a happy one. Not every book needs to end on a high not of course, but because I liked Marion so much, I hoped that her story would have a more fitting ending. I don’t want to give anything away for readers but I felt a little unsatisfied with the ending and I don’t know if that was because I was hoping for a more positive outcome for Marion or because I just always want a happy endings.

In the end, I gave this one 4 stars because I loved the subject matter and story but would have liked a different take on the ending.

2 thoughts on “Review: The Royal Governess by Wendy Holden”