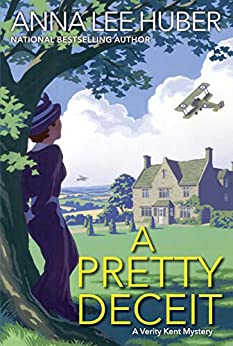 I have been a long time fan of Anna Lee Huber and I have read every single one of her books. I never miss one of her new releases so obviously I had the next Verity Kent book on my calendar months before its release.

When I first started this series it felt different than Huber’s other books not just in time period but in characters too. Verity Kent has a lot more grit and grey area to her than some of Huber’s other heroines.

And don’t even get me started on Sidney. I have struggled with Sidney’s character since the first book and have in all honesty never quite warmed up to him based on some of his deception. But I have stuck out this series because it is excellent.

In the aftermath of the Great War, the line between friend and foe may be hard to discern, even for indomitable former Secret Service agent Verity Kent, in award-winning author Anna Lee Huber’s thrilling mystery series.

Peacetime has brought little respite for Verity Kent. Intrigue still abounds, even within her own family. As a favor to her father, Verity agrees to visit his sister in Wiltshire. Her once prosperous aunt has fallen on difficult times and is considering selling their estate. But there are strange goings-on at the manor, including missing servants, possible heirloom forgeries, and suspicious rumors—all leading to the discovery of a dead body on the grounds.

While Verity and her husband, Sidney, investigate this new mystery, they are also on the trail of an old adversary—the shadowy and lethal Lord Ardmore. At every turn, the suspected traitor seems to be one step ahead of them. And even when their dear friend Max, the Earl of Ryde, stumbles upon a code hidden among his late father’s effects that may reveal the truth about Ardmore, Verity wonders if they are really the hunters—or the hunted . . .(summary from Goodreads)

I have been Team Max since the first book and I still keep hoping that Verity will throw over Sidney in favor of Max but admittedly I doubt this is going to happen. But a girl can dream right? As I said, this series is excellent and captures the raw emotion left over from the Great War years in a way that Maisie Dobbs never did for me.

If you love Maisie Dobbs or Maggie Hope there is no doubt you will adore Verity Kent but I didn’t love Maisie Dobbs (Maggie Hope—YES) she was just ok for me there was something detached about her as a character that I could never place, which perhaps was the point. But with Verity, as a reader I really get the emotional turmoil and struggles that she is facing in her new post war life and all its relationships. Verity Kent is more gritty and raw for me and I have loved this series because of it.

Huber’s other books have a strong romantic element to the mysteries where as Verity Kent is more mystery. In this one, there is a lot to unpack when it comes to the mystery. Sidney and Verity are closing in on a long time villain and there was quite a bit of action in this one! Personally I would not read this book out of order. If you are considering this series, I would start back at the first book rather than picking this one up. There are other threads of this mystery that are from previous books and new readers might feel lost.

I think this might be Huber’s best mystery in this series so far. While I have liked each book independently for various reasons, this one stood out as a shining star for me. It had a lot of exciting elements with in the mystery—the art forgeries were an interesting piece for me considering I just finished another historical mystery that included a detailed art forgery and was hungry for more—not to mention the pacing was perfect! I didn’t feel like there were any slow spots or unnecessary filler dialogue. It was great all around!

Of course I am looking forward to more books from Huber—that goes without saying! You can bet that I will have whatever book she pens next up for review the second I can get my hands on it! Well done!

Kindle Edition, 304 pages
Expected publication: September 29th 2020 by Kensington
ASIN B082WRDB98
Free review copy provided by publisher, Kensington, in exchange for an honest review. All opinions are my own and in no way influenced.
Rating: 5 stars
Genre: historical mystery