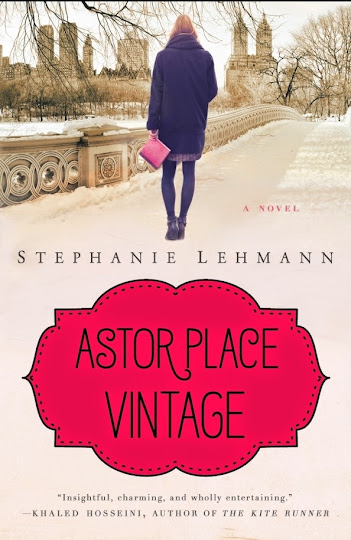 New York City has always been known for its diversity and innovation. It’s a city in a perpetual state of movement and change.

In a little shop in Manhattan’s Lower East Side, vintage clothing store owner, Amanda, finds her life in utter chaos.

She is about to turn thirty nine, no children and no husband….in fact she is actually having a long standing affair with a married man.

Not to mention she is on the brink of financial ruin. But rather than do anything about her sorry state, she is more or less ignoring it all together.

Amanda gets a call from an older woman who is dying of cancer and would like to sell some clothes on consignment. When Amanda arrives at the she finds some great merchandise to take back to her store, tons of clothes from a variety of modern decades but what she doesn’t bargain for is an Edwardian era trunk full of delicate antique clothing.

The woman simply wants to be rid of the hefty trunk and practically begs Amanda to take it. While going through and inventorying the contents of the trunk, she discovers a hidden diary written by a young woman, Olive, who is also living in Manhattan but at the turn of the century.

Curiosity gets the better of Amanda and she starts reading the diary and is immediately captivated by Olive’s life. Olive has just moved to New York City with her father who is manager at Woolworth’s. She has grown up in a small town in upstate New York and her family has always been very affluent.

Olive isn’t your typical upper class girl, she wants nothing more than to be a buyer for a department store. Her father indulged her forward thinking ideals and gave her a position in his store ordering merchandise and other goods but of course never paid her for her “work”.

Now that they moved to the city, Olive hopes to get a real job at a department store but quickly finds out that without a reference letter from a paying employer she is unlikely to gain employment anywhere.

Her father hopes she will marry a well to do man of her class and quickly settle into married life and raising children and forget this fantasy. Though she has no interest in marriage, she is curious about romance and love.

Ultimately though her goal is to be a buyer and be independent….but having a comfortable, cushy life does have its draw backs. Unlike most “working girls”, Olive doesn’t have to work….working for her is more or less a hobby and nothing more so she doesn’t pursue her dreams with the same determination the working women do.

But as fate would have it, tragedy strikes and Olive soon loses every bit of comfort she has ever known. She is thrown out on to the unforgiving streets of New York City alone and penniless.

While reading her tale, Amanda can’t help but look around and see Olive’s world everywhere.  It’s almost like she’s in a parallel dimension seeing the same buildings and walking the same streets that Olive walked and seeing all these different connections between her life and Olive’s.

The story alternates between 1907 and 2007, one chapter from Olive’s perspective and one from Amanda’s. I thought the duel POVs worked really nicely in this story. It was fun to see how different the attitudes were about certain things depending on the period and yet how similar things still are.

For example, Olive was a virgin and had pretty much zero knowledge about sex and sexuality and there was such limited info out there available to her in 1907. Then we switch to Amanda’s modern day POV and we see how cavalier and accessible sex is for the modern woman.

In Olive’s day, women relied on men for financial security and income and even to this day, there are some women, like Amanda, who still rely on men to support them financially—Jeff helps keep Amanda’s business afloat, but like in Olive’s era that money doesn’t come without a price tag or expectation.

So I really enjoyed reading both POVs and thought it worked very very very well in this novel.

As for the characters, for me, Olive was the true heroine of the book. I completely fell in love with her. She had the perfect mixture of innocence and pluck. Her character and story drew me in almost immediately. Sometimes she made decisions that I thought went against what I thought her character should be, but at the same time I found that compelling and exciting!

Olive was kind of stuck in what I like to call ‘history’s limbo’. She wasn’t a repressed woman of the Victorian era but she wasn’t quite the ‘Modern woman’ of the 1920’s. She was stuck in a very important transition period for women and I thought the author captured that dilemma spectacularly.

I didn’t really care for Amanda. I personally felt like she was way too insecure and almost too pathetic for me to like. She grew on me a more toward the end of the novel but ultimately, for me, it was a little too late. I just couldn’t say that I loved her.

Even though I can’t say that I loved Amanda, I thought she was the most real character in the novel. Olive was perfect as the ideal heroine but Amanda was real. She was in a real dilemma and had to make some real tough choices, I thought that came across well in her character. I think a lot of women can relate to her in some way or another.

One thing that I particularly loved in this novel was how the author incorporated old pictures of New York into the novel. It was fun to see how Manhattan has changed by yet how the past remains immortalized in the future in the form of buildings. I will admit, I love New York City and its rich history and I thought the author captured that same nostalgia and history that Manhattan is so famous for.

To borrow a phrase from Olive….I would have to say this novel is lovely! It was charming and entertaining at the same time. It held my interest and I really enjoyed reading it from beginning to end. No low sports in this novel, it moved along nicely. With likeable characters and an interesting story line, this novel will be sure to entertain readers and fans of historic fiction and chick lit alike!

Be sure to check out the other stops on the book tour for guest posts and interviews with the author!

‘Tears! How mortifying. I refused to be so easily broken and wiped them off quickly’

‘The past! Right here in our midst, and we were so utterly oblivious going about out days worshiping the present, as if the generation of ‘now’ was the only one that mattered’

‘is it brave when you’ve got no choice’

Monday, July 8
Review at Confessions of an Avid Reader

Wednesday, July 10
Review at Turning the Pages
Interview at Let Them Read Books

Thursday, July 11
Review at So Many Books, So Little Time

Friday, July 12
Review at The Lit Bitch
Review at Peeking Between the Pages

Friday, July 19
Interview at Oh, for the Hook of a Book!