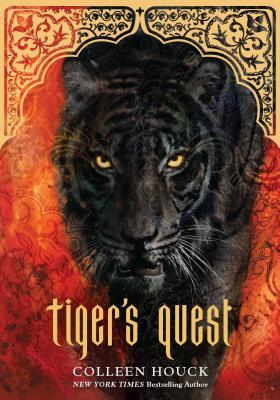 Kelsey Hayes has just arrived home in Oregon from her adventure packed and emotional summer abroad in India.

Kelsey has been helping two brothers, Ren and Kishan, try and break an ancient curse.

She and Ren successfully fought off deadly monkeys to break the first part of the curse, but they still have to complete a series of challenges to break the entire curse.

While they have been tracking down the clues that will break the curse, Kelsey and Ren have also fallen in love.

Kelsey is scared to death that Ren will break her heart so she does what she thinks is best–she runs like hell back to Oregon leaving Ren alone in India.

She loves Ren but deep down she doesn’t feel like she deserves him, plus he’s been a tiger for hundreds of years how does he know that she is the one for him?

Breaking up with Ren and moving back to Oregon seems like the most logical thing to do, but there’s one problem–Kelsey is miserable without Ren. After months of separation, Ren (who is equally as miserable as Kelsey) shows up on her doorstep begging for another chance.

Soon after Ren arrives in Oregon, his brother Kishan also shows up. The evil wizard king, Lokesh, is looking for Kelsey and he has come to help protect Kelsey.

Before too long, Lokesh’s thugs find them, and before Kelsey, Ren, and Kishan can escape, Ren is captured–Kelsey and Kishan flee to India in hopes of locating Ren and also continuing the quest to break the curse and defeat Lokesh for good.

Kelsey and Kishan begin spending a lot of time together trying to figure out the riddles and clues that will lead them to the next challenge and suddenly they find themselves questioning what their destiny might hold.

Could Ren really be the one for Kelsey, or was she meant to be with Kishan all along?

I started reading this book immediately after finishing Tiger’s Curse and I enjoyed it just as much if not more. One of the things that I liked best about this installment was we get to know more about Kishan.

In TC  Kishan is the brooding bad boy, a darker more dangerous version of Ren but we don’t really get to know much about him and his back story like we do in this book.

What can I say I’m a sucker for bad boys and Kishan immediately stole my heart in TC, but in this book I couldn’t help but fall more in love with his character.

Because I like a rebel, I love that Kishan loves Kelsey and even though she belongs to another guy–and not just any guy but his brother–he goes after her anyway. That takes guts and I love that Houck goes with that instead of playing it safe.

I know a lot of readers may not like that about Kishan’s character but I do. I think it makes him so much more appealing. Kishan loves her in-spite of her relationship status and he isn’t afraid to go after what he wants the consequences be damned!

But underneath all that tough guy exterior, there is a bleeding heart that wants nothing but to be loved and have a life he can be proud of. I love that about him. He’s obviously been through a lot and had to suffer the consequences for his actions…..he’s had to live with his own demons.

On the flip side, there is Ren. Who couldn’t love Ren? He’s charming, romantic, and dashing. He easily sweeps Kelsey off her feet and the reader as well. For me personally, I found Ren a little too conventional.

Sure he was charming and the ideal boyfriend….who doesn’t want a guy like Ren? But at the same time, I like a little more complexity and darkness in my romantic interests. Ren is easy to love while Kishan is more of a challenge.

As for Kelsey I liked that she grew up more in this book. She seems to be coming into her own and becoming a woman. The only thing that bugs me about Kelsey isn’t so much that she is torn between the two brothers, its more that she is trying to deny her feelings for both of them.

Part of me feels like she isn’t really giving Kishan a chance and she’s fixated on Ren. I am excited to see where things go in the next book. I want to see how the dynamics change between all of the characters and the love triangle.

The action and adventure aspects of this novel continue to thrill readers! As I mentioned in my review of TC  one of the things I love most about this series is that it’s colorful and unique. I love the setting and all the mythology!

Normally I’m not a huge mythology fan because it can be confusing for me at times, especially Hindi mythology, but Houck does a fantastic job explaining all the myths, legends, and characters for readers so the audience can easily follow along.

The Hinidi culture is a very colorful one and I think Houck did a superb job highlighting that for readers. Clearly she’s research the culture and country well, her love of the Indian people really shines through in this novel. Well done!

One final note, I am in love with this cover. The first one was beautiful but this one I thought really captured the vibrant feel of this novel. The fiery tormented relationship between Kishan and Kelsey as well as the colorful Hindi culture and mythology….in a word, stunning! The cover compliments the story perfectly!

How do you live with something so mediocre when you’ve had something so exceptional? I guess you just do and learn to treasure your memories.

A pledge made in a moment of passion isn’t lasting and I don’t want you to have any doubts or any regrets about having a life with me.

The soul that can speak through the eyes can also kiss with a gaze (Gustavo Adolfo Becquer).

I won because I know how to win. Cheating is irrelevant. You have to learn to do whatever it takes to win.

A friend, someone who cares about him and love him and won’t let him give up on himself is what Kishan needs… a young man needs a young woman who believes in him.

If a man wishes to do a thing and has enough passion to find a way..he will achieve it.

Stolen kisses are better than none.