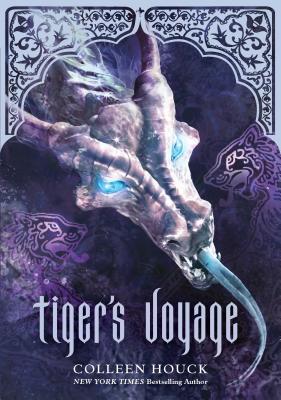 Kelsey Hayes is once again heartbroken. Her beloved Ren doesn’t remember who she is….at all.

In fact her very presence repulses him and makes him physically ill.

Kelsey agrees to continue helping Ren and his brother Kishan try and break the tiger’s curse.

This time their journey takes them to the Indian Ocean and the dragons that inhabit a parallel world that Ren, Kishan, and Kelsey must navigate in order to break another part of the curse.

In the last novel, Tiger’s Quest, Kelsey begins to have stronger feelings for Kishan…stronger than she cares to admit. In this book, she learns that Ren has actually broken the bond that they shared and is actually blocking out all memory of Kelsey himself.

Angry and heartbroken Kelsey must try to move on with her life. Before too long Kelsey and Kishan make their feelings for each other known and soon things begin to heat up between the two. Though it’s nothing like it was with Ren, Kelsey loves Kishan and plans on making a future with him.

Suddenly Ren’s memory comes back and Kelsey is faced with a difficult decision….does she let Ren go forever or does she leave Kishan behind. The decision is tearing her apart.

Ren is everything fierce, passionate, and unpredictably fiery where Kishan is more solid, steady, and dependable. She loves both brothers and knows either one of them would make her happy but as things progress her feelings get more and more convoluted and she knows a decision must be made….soon.

While Kelsey is trying to figure out where her heart truly lies, the group must navigate a parallel universe rich with Chinese mythology and dragons in order to get Durga’s Pearl Necklace. But one small slip could leave them stuck in limbo between the mythical world and reality.

The dragons on each plane will test both their physical and mental strength and those tests often come with sacrifice.

This book started off with a bang but then it kind of fizzled out for me on places. Don’t get me wrong, it’s still a great installment but I don’t know if I can give it five stars.

There was a lot of action and rich mythology throughout the novel as in the previous books in the series but this book went away from the traditional Indian mythology that book I and book II had which was disappointing for me.

I realize that Ren and Kishan’s mom was from China so at some point it would be appropriate to have some Chinese mythology sprinkled in the series but for me, I just couldn’t get into the dragons and the quest as much as  I did in the previous books.

I loved that in Tiger’s Quest (TQ), Kishan got a lot more focus. I felt like he really grew on me in that book and in the beginning of this book I still loved his character and was really excited to see where his relationship with Kelsey went. Their relationship had so much potential but half way through the book I felt that it didn’t reach it’s full potential.

In previous books, Kishan is  the witty, charming, and slightly cocky ‘bad boy’. Which I absolutely adore about him. He always seems to be looking out for Kelsey but not smothering her. I didn’t really feel that way about Kishan in this book after the half way point. About half way through he seemed like he backed off a little too much with Kelsey and more or less faded into the background which I thought was unfortunate.

Ren has always been the overprotective hero that wears his heart on his sleeve…passionate and romantic but in a different way then Kishan. For me I found Ren’s over-protectiveness and jealousy in this book a little on the annoying side. As a reader I kinda felt like saying “ok we get it already Ren loves Kelsey and wants to keep her safe”.

That said I still really enjoyed the book, just not as much as the first two. The action in this book was a lot more packed. There was a lot going on with the quest and a lot more pieces of the curse coming to light. There wasn’t a lot of research, prep, or build up to the action as there was in the first two, as soon as this book started…..it hit the ground running with action which I really loved.

Kelsey’s character grew a lot in this installment. In the first two books, she seemed a little on the vague side about her feelings for the brothers etc. In this book I felt like she was much more open and honest.

She really grew up in this book. She is faced with very adult situations and questions and for me, her character more than stepped up to the plate. Kelsey was always honest with both brothers about her feelings….I love that she didn’t try to delude or give false hope to either.

This series is so fun! I can’t think of any other way to describe it! I love the colorful, rich, and unique concept of the plot. The characters are solid and relate-able for readers of all ages. Houck does a great job painting a vivid picture of these myths and alternative worlds where deities and myth meet reality.

Your heart knows. Your soul remembers.

I was destined to love you, and I will belong to you forever.

Normalcy is an illusion. Each person is utterly unique. A standard of normalcy is something that most people of the world simply will never access.