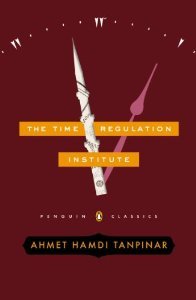 Set in post-Ottoman Turkey, we meet a host of colorful and eccentric characters struggling to adjust in a rapidly developing modern world.

This book is full of allegorical references and presents a colorful and unique view of Turkish culture and society.

The book describes the setting up of the modern bureaucratic state. At the center of the story itself is our charming antihero, Hayri Irdal.

He has been described as infectiously charming and be becomes entwined with some interesting people–a television mystic, a pharmacist who dabbles in alchemy, a dignitary from the lost Ottoman Empire, a clock whisperer-at the Time Regulation Institute.

The Institute it self is described as a “vast organization that employs a hilariously intricate system of fines for the purpose of changing all the clocks in Turkey to Western time”.

The story itself is recounted during Hayri Irdal’s psychotherapy session and his stories are often a mixture of tradition versus modernity and the fine line between a longing for simpler times and the excitement of a modern future!

This was a very very difficult book for me to review. This is one of those books that completely out of my comfort zone. I have never read any Turkish authors nor do I really know much about Turkish culture, let alone the Ottoman Empire history.

I wanted to read it though because it presented such a challenge. I like when literature challenges me to venture outside my comfort zone.

So needless to say this book was a bit of a struggle for me. That’s not to say it wasn’t good, it was–but it was a struggle for me to read at time because I felt like I was ‘missing’ some of the major themes.

I loved all the dark humor and I applaud the author for creating such rich characters though. Even though I was lost in the culture, I was able to identify with some of the characters and their personalities.

I absolutely loved Hayri. He was likable and endeared himself the the audience in different, quirky ways. He won me over almost instantly. He was one of the most complex characters in the novel, if I read the novel again I think I would continue discovering new things about him to like and I think others would agree.

As I mentioned, for me personally, I felt like a lot of the satire, allegory, and symbolism was lost on me. Not knowing much about Turkish anything made some of the references difficult to process and understand.

Though I don’t think I fully appreciated all the references, I did gain a huge insight into Turkey and it’s history. I often found myself thinking about that time in history and what it means to be ‘modernized’.

This was a novel that really made me think. It’s more of a ‘high brow’, intelligent book to read but it’s a thinker. I found myself evaluating my western ideas and comparing them to the eastern ones in this book. I also thought about history, society, and modernization. I like books that make me think.

So here’s the big question that you all want to know….did I like the book or not? That’s a tough one. Did I like it–yes, did I fully understand it–no.

I liked the story telling style and voice that Tanpinar used. I thought he had a unique voice and and the tone of the book was both hopeful and sad but at the same time comical. I loved that about his writing style.

What I am not sure of though is if that’s truly the way Tanpinar intended it to come across or the translation. But regardless I thought it was a unique narrative.

For me this wasn’t light reading so I would recommend this book to someone who is really into high brow, intelligent literature or simply wants to broaden their literary pallet.

That said, I rated it 4 out of 5 stars because I thought it was so unique and it challenged me to think of things in a new perspective. I thought Tanpinar had a strong voice and great writing style, the story and characters were vivid and memorable.

Just because I was lost in some of the satire is in no way the fault of the author. Therefore I felt the positives of the book outweighed the struggles that I had with it personally.