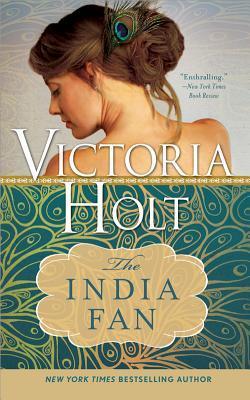 Blackmail. Murder. Scandal. Lies. Deceit. Romance. Adventure. This book has it all!

Growing up, I loved Victoria Holt but sadly I haven’t read her in a number of years…..nor have I read many of her novels.

But she is the queen of a genre that calls to me–the gothic romance genre. When I saw The India Fan on Amazon, I knew it was time to it up this talented authoress again and see if she could still seduce me with her tales of suspense.

Drusilla Delany is the rectors daughter and has always grown up in the shadow of Framling House and the Framling family.

Fabian Framling has always been a spoiled child….over indulged by his domineering mother. Then there is his sister, the beautiful and impetuous Lavinia–she is everything that Drusilla is not.

Drusilla is not known for her beauty or her womanly charms….she is smart, sensible, and plain. Sure to be an old maid, she becomes rather close friends with Lavinia. Lady Framling hopes that Drusilla can act as a kind of chaperone for Lavinia and when Lavinia is sent away to school, Drusilla goes with her.

While they are at finishing school in France, a terrible scandal happens to Lavinia and she has only one friend she can really turn to and that’s Drusilla. But the scandal can’t be covered up by the two girls alone….they enlist the help of a few trusted others. Just when they think everything has passed, the ‘friends’ that helped them start blackmailing Lavinia to keep her secret from making the front page of the society columns.

But blackmail soon turns to murder, leaving Lavinia in the clear to start her new life when she marries an Earl. Soon Lavinia and her husband are dispatched to India where her husband is a member of the East India Company. Drusilla remains behind in England trying to figure out what is next for her life.

Fabian remains in contact with Drusilla throughout her time as an adult and continues to be a strong presence in her life and insinuates that he would like their relationship to be something more. But what could the lord and heir of Framling want with the rector’s plain daughter?

Soon Fabian is also sent to India to assume his role in the East India Company as well. He sends for Drusilla to come as a companion to Lavinia and as a governess to Lavinia’s children. With no other prospects, Drusilla accepts and eagerly makes the journey to India.

But India is far from being a peaceful country….the locals despise the English and the threat of mutiny is a constant concern. Danger and ancient curses are lurking in every corridor and object.

I have to say, even after all these years, Victoria Holt holds a special place in my heart. Her books are timeless and never hokey.  While many of her novels are set in exotic locations and her characters have sensational names they are novel ‘simple’ stories and more than just bodice rippers. There is romance and sexual tension but nothing overly salacious.

I loved Drusilla as the heroine in this novel. She is a modernized Jane Eyre, the poor plain country lass seducing the dark and mysterious lord of the manor. She was intelligent and never careless like Lavinia. She always did what was sensible and I admired her greatly for that. She was strong but at the same time vulnerable. The audience really grows up with her throughout the novel and though there aren’t drastic changes to her character, she is solid and continues to grow into herself though out the book.

Fabian was also a likable character. He wasn’t unredeemable and I never felt ill at ease with him. He was clearly the hero and acted appropriately and also grew in the story. It was wonderful to watch Drusilla and Fabian grown as individuals and as a couple in the novel.

The novel read a little slower than I expected. I read it aggressively for a couple of days and still was like really I am only that much through it?! It was only 400 pages and I felt like I should have finished it much faster than I did. But just because it read slow doesn’t mean it was a slow story. There was a lot happening and ever page was critical to the story. The novel covered a number of years and a lot of scenery and history—all things considering I was glad that I didn’t rush through this novel.

I loved the gothic elements sprinkled in the storyline. The mysticism, ‘curses’, and the mad woman in the attic were all familiar tools and I thought it added a lot of sensationalism and atmosphere to the book.

This is a book that I would not hesitate to pick up again. It would be a fun book to read by the fire on a dark stormy night with a cup of tea–or anywhere for that matter. If you haven’t read Victoria Holt, The India Fan seems like it would be a good one to start with. A cursed heroine, an exotic setting, salacious sandals, adventure….this book really has a lot to keep the reader interested and enjoying not just the plot but the characters as well.

I believe that it is better to get through life as easily as one can….and if ignorance is more soothing than knowledge let’s remain in the dark

Men are funny things. There’s the good and the bad, the faithful sort and them that can’t stop running after women even if they know they’re sitting on a keg of gunpowder. It’s choosing the right one to start with that’s the thing.

Men are notorious for turning away from the women who would make the best wives and falling in love with some flighty creature because she looks pretty in moonlight…and often they regret it later.

10 thoughts on “Review: The India Fan by Victoria Holt”