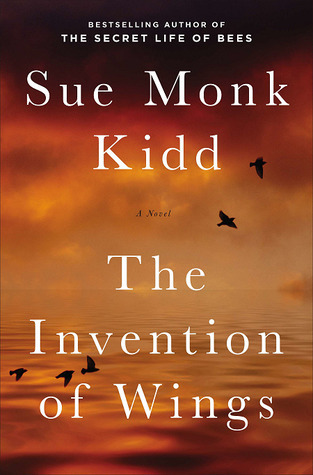 Hetty and Sarah have grown up very differently. Hetty (“Handful”) was given to Sarah on her eleventh birthday as a slave.

Sarah is from a wealthy family in pre Civil War South Carolina….one of the ‘first families’ in fact.

Though she tries to free Hetty, her parents remind her that she is expected to own salves and she must simply make the best of things.

So the two girls who are similar in age grow up together.

The story of these two girls is told in two separate narratives. We learn a little about each of the girls families and upbringing as the story goes along.

Sarah and Hetty grow close and share secrets and learn from each other as any other young girls would.

For example, Sarah teaches Hetty to read but when they are found out, the consequences are rather severe for both girls. So the reader quickly gets an understanding of how brutal the life of a slave was.

Each of the women have very different and unique voices which I thought really allowed the reader to connect on an individual level with the narrators.

Sarah is the heart of this novel though–at least for me anyway. While I loved Hetty’s story and the relationship with her mom which was colorful and illuminating, I simply could relate to Sarah more than Hetty. This book is based on the real life of Sarah Grimke, an abolitionist and activist for women’s rights.

I don’t know much about her apart from what I read in this book but it was interesting to see a woman, of that time and region in particular,  so dedicated to the betterment of slaves and women in general. Truly an inspiring woman and character in this novel. I adored her.

Sarah and her sister were truly champions for feminism and anti-slavery. I was very inspired by their story and to see them grow and mature into independent women was wonderful.

The thing that drew me in about Sarah’s character was that she wasn’t perfect or always likable, but she was always ‘real’. She struggled with what the ‘right thing’ and the ‘wrong thing’ was to do like any normal woman would.

The only thing that I was sad about was I didn’t know this book was based on a real person’s life until the end of the book when I read about Kid’s research at the end of the novel.

I have only read one of Sue Monk Kid’s other novels, The Mermaid Chair, many years ago and I wasn’t terribly impressed with it. So I never picked up The Secret Life of Bees, but when this one came along for review, I decided to give her another try–and I’m very glad that I did.

This novel was a triple threat….powerful, poignant, and passionate. The way she wrote was sweeping and all consuming. I never felt board or that it moved too slow. Her research was second to none, and brought to life with her writing style.

This was a sensational read, the only thing that made me knock down half a star was that it ended a little to quick for me, but other than that this was a fantastic novel to read.

It was a little heavy at times so I don’t know that I would consider it ‘light reading’ but once you start reading it, it is difficult to put down.

Book: The Invention of Wings by Sue Monk Kid

5 thoughts on “Review: The Invention of Wings by Sue Monk Kidd”