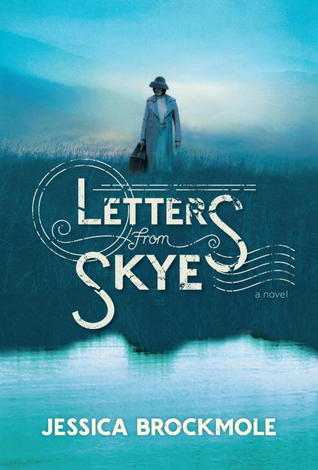 What do you do with a married woman besides leave her alone? David Graham is stuck in quite the predicament!

His letters and heart have been laid before a woman half way around the world, now it’s up to her to decide if she will erase him from her life completely or risk a correspondence.

A forbidden love story written entirely in letters spanning two world wars? Be still my heart! This is the book I’ve been looking for!

I am a real romantic at heart and to me there is nothing more romantic than a love letter. But that’s not exactly how this story starts out.

Elspeth Dunn is a published poet who lives on the remote Scottish island of Skye.

One day she receives her very first fan letter from David Graham in America.

That first fan letter in 1912 turns into years of correspondence and what slowly becomes a deep love and admiration for each other.

In 1940 Elspeth’s daughter, Margaret, thinks she knows her mother very well. Her mother raised her alone and has always refused to talk about her father or her life before Margaret was born.

One night a bomb rocks Edinburgh near where Elspeth and Margaret live. When Margaret races to check on her mother she finds a suitcase full of letters addressed to a mysterious woman named “Sue”.

When Margaret asks her mother about the letters, an argument ensues  and Elspeth disappears. She contacts her daughter a week later and explains she’s chasing ghosts in London–nothing more.

Margaret sets out to find her mother and find the secrets and ghosts that her mother has been keeping all these years.

I thought this novel was going to be really confusing as it was told all in letters. Literally there was no dialogue or back story or anything–just letters.

I also thought it would be hard to get to know the characters without having dialog or a back story etc, but I was wrong on both counts.

There is something surprisingly intimate about a letter. I felt like I knew the characters in such a unique and intimate way. I connected with them so much more deeply than I have with other characters in a standard novel.

I felt like I knew them immediately from the first letters, rather than ‘getting to know them’, it was as though they were instant personal friends. With David’s first letter, though it was short, the reader instantly sees his witty personality and charm.

Then with Elspeth’s reply we instantly know by the tone of her letter that she is smart and equally as witty but a little less bold than David. As the letters continue we see to the hearts of their characters and grow steadily in love with their story.

I couldn’t help but feel that this story was so real, which for me was due largely to the epistolary style. That narrative style drew me in to the novel in an unexpected and personal way. I can’t say enough great things about it!

The novel read fast because of the narrative style. I was shocked to see I had read as much as I did. There were never dull moments and each letter contained relevant info to the over all story.

It was easy to love the romance between Elspeth and David. It was sweeping, tragic, and stunningly romantic. This novel not only touched on lots of themes, the most obvious being romantic love. It also talked of guilt, loss, regret, and secrets.

I loved how Margaret basically knew nothing of her mother’s life up until she was born. Isn’t that typically the case? Before kids come a long their parents had lives, romances, dreams, hopes and regrets that often children know nothing of . I thought Brockmole did a wonderful job highlighting these other themes throughout the novel.

This book was thrilling and moving in so many ways. It’s been a rare thing for me lately to read something that truly moves me and leaves me thinking about the story long after it’s over. This book made it impossible to forget the characters.

Their stories and lives seemed so real and important to me as a reader. I was in rapture over the story! I can’t believe it took me so long to read this book. If you see it at the store or have it on your TBR list, move it up on your to read immediately!

I simply can’t say enough good things about this novel, I honestly found so much to love in this book that I wish I could list everything here but I don’t want to spoil it for anyone! Just read it already!

Genius is the activity which repairs the decay of things

Bad news will find you no matter how far you run

6 thoughts on “Review: Letters from Skye by Jessica Brockmole”